Hey folks! Grab your construction hats and work boots. Today, we’re building the tallest houses. We’re not building them just for anyone though, we’re trying to help Super Rhino. He needs the tallest houses to watch for bad guys. We’re playing Rhino Hero. It’s a 2-5 player game from HABA and takes 10+ minutes. It’s a kids game, but much more than that.

Rhino Hero comes in a small box. It contains the rules, Rhino Hero meeple, 1 foundation card, 28 wall cards, and 31 roof cards. The wall cards are creased and meant to be bent to make as close to a 90 degree angle as possible. The roof cards have HABA on one side, and the other side lets you know how many walls and where to place them.

Roof cards let you know where to place the wall cards. They have lines on the card that indicate where to put up walls. Some call for two walls, while others call for only one. Roof cards are also known as actions cards in the game. That’s because some of the roof cards will have icons in the corners. There are 5 icons in the game. The first is a green +1, and this makes the next player draw a roof card from the deck. Then there’s a blue exclamation mark. This skips the next players turn. There’s a purple half circle arrows, and this switches play direction. There’s a red +2, and this lets the player play a second roof tile. Lastly, there’s the rhino icon. For this roof, you need to place Super Rhino from the roof he was on to the newly placed roof. As you can see, there are some of the Take That elements in this game. I find a lot of the actions reminiscent of Uno cards.

Game play is as follows. Start with the foundation card. The side with two walls is basic play, the side with one wall is advanced play. Then, deal 5 roof cards to every player. First player is determined by either the youngest player or player who has done a good deed most recently. Each turn, a player must build the walls and place a roof tile, following the actions on that roof card. There are some stipulations when building a floor. You can use both hands when building, but can only touch the walls and roof you’re placing. The way the roof tile is placed has to match the foundation card. Once a player has finished their turn, it moves on to the next player. 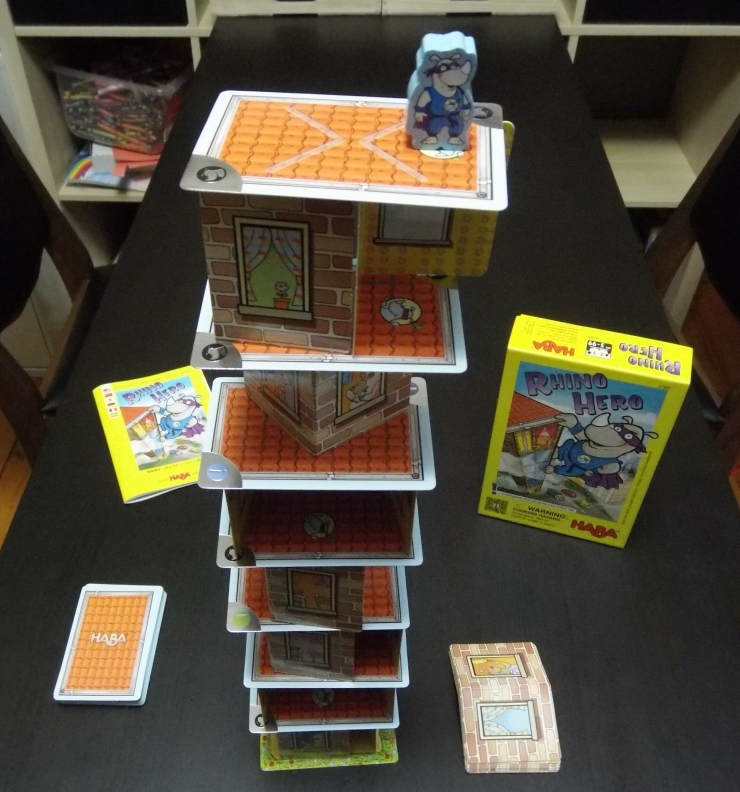 This is a very light, fun, dexterity game. It has a hint of Take That in it. It reminds of Uno and Jenga. It’s a bit of reverse Jenga as you’re building instead of unbuilding. You’re trying to get rid of your roof cards, and not knock down the tower. My kids have enjoyed this one, and I’ve enjoyed it as well. We haven’t gotten the house past 9 stories, but a lot of that is due to my three year old playing. If you ever tried building a house of cards, Rhino Hero accomplishes it in a way that makes it into a game. It’s quick to learn, easy to play, and fast to play. I would recommend this to anyone that has enjoyed dexterity games like Jenga, but want something more with a theme. I believe this will become my 3 year old sons new favorite game due to the ease of play and destruction that follows when it collapses. No kids needed for this game. It is just as fun with or without kids. Each turn you can see the focus on players faces as they place walls and roofs. It’s a great dexterity game that I know I’ll be playing for a while.

There’s another version of this game called Rhino Hero Super Battle. It’s s bigger, more super version of this game. It’s 2-4 players, and has the players each controlling a hero. There’s Rhino Hero, Giraffe Boy, Big E, and Batguin. It’s got similar game play as Rhino Hero with a couple of changes. There’s a fighting other superheroes along the way, multiple columns to build your tower, and spider monkeys that you’ll be placing along the way. After the success of Rhino Hero in our house, I’ll be on the look out for Rhino Hero Super Battle.