Codenames, dang it. Decrypto comes in a medium box. It contains the rules, 2 team screens, 48 code cards, 110 key cards, 4 intercept tokens, 4 miscommunication tokens, 50 note sheets, and a sand timer. A note about the 110 key cards. Each key cards utilizes the front and back making 4 different words available per card. So in actuality there are 440 key card words in total. The team screens use the cutting edge red film technology. Just like Passwords game that came out in 1962, the key cards are made up of a red ink pattern with a blue word underlay. The red film makes the red ink “disappear” to reveal what word was hidden. Now, the components are made to look like 80s computer technology too. The code cards look like floppy discs, and the player screens and box look like some computer that belongs in a museum. It’s got a great feel to it. The goal of the game is to get two intercept tokens of the opposing team to get two miscommunication tokens.

To set up the game, first set up the player screens with the red film facing your teammates. Next, draw four key cards and place them in your screen. These key cards stay with your team for the whole game. No switching them out after a round. You want your team to be able to see the words and not your opposing team. You’ll note that under each key word is a number that goes from 1 to 4. This will come into play when I talk about the code cards. Each team also gets a writing utensil and one of those note sheets. The note sheets white side and a black side. You’ll use both sides in a game. One side for your team and the other for the opposing team. This helps you keep track of clues given and what the other team has given as well.

Now, one member from each team becomes the code master. Once again, code master. Not Codenames. They draw a floppy disk code card without letting teammates see it. Each code card has three numbers on it. The numbers range from 1 to 4 and are the order of clues you’ll give. For example, if you have Mouse, Purple, Scorpion, and Elephant words. You draw a 4, 3, 2 code card, that’s the order of clues you want to give. I would probably use Grey, Desert, and Haze as my clues. On the note sheets, the code masters will be writing down their clues for the code. The opposing team does this at the same time. Code masters will take turns reading their clues. Your team will discuss and write the numbers in the question mark box as to what they think the answer is. The opposing team does the same. Now for the tricky part. The other team gets to guess your code first. If they answer correctly, they earn an interception token and block your team from answering. If they don’t answer correctly, your team gets to answer. If your teams answers correctly, good job! But all that does is prevents you from losing. If your team gets the answer incorrectly, your team gets a miscommunication token. Two of those and your team loses.

Now the other team goes with the same format. You’ll record the answers and write the numbers of what you think the code is. At the bottom of the note sheet, you’ll see four columns. Write a collection of the clues down here per team. Each round, you can’t use a clue that was previously given. It also gives you insight to the types of clues the other team has used and for what numbers. This comes in handy as you can start to deduce what words or phrases correlate to what number. Digit, Limb, Bird, Flight, Boneless, Plane could all be used as a clue to Wing. You want your team to get it, but still have the other team guessing. 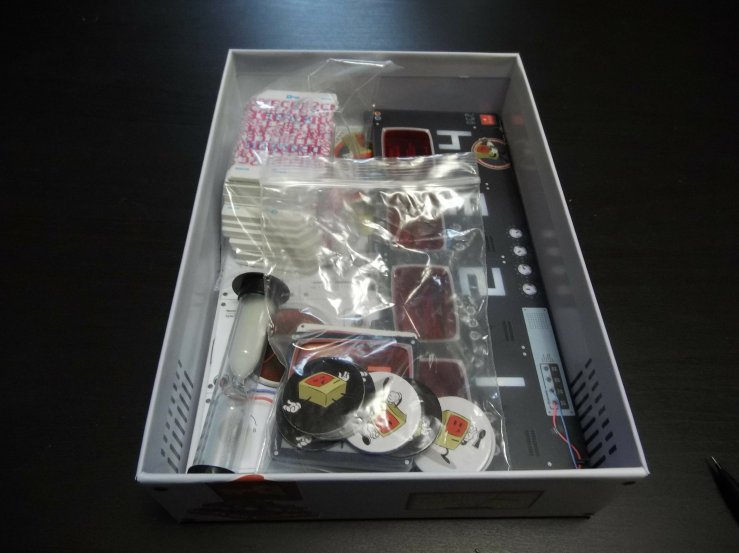 As with Codenames, my one gripe is the box and storage of components. The box comes with baggies, I loath baggies. The code cards, key cards, and tokens are kept in baggies. The screens are three parts to put together. The actual screen part, and then the legs. The legs slide in the bottom of the screen, and if not too careful can bend and make the connection loose. I usually take the legs out when storing the game, as I don’t want to break it. The components slide around, and it looks a little messy when you open the box. I’ve looked, and I don’t see an Insert made for this game yet. We’ll see if that changes with time and if this games becomes as popular as Codenames.

So, besides the storage, what do I think about Decrypto? It’s similar to Codenames yet plays different. There are times in Codenames that while the opposite team is taking their turn, I want to answer and give my input into what word the clue is hinting. This game does it in a smart way that incorporates it into the win condition. It doesn’t matter if your team keeps winning your clues, it matters that you get the other teams clues. The advantage your team has is that they can see the words and numbers they are in. It makes it harder when you don’t know the key words and can’t see the numbers. I liked that aspect of trying to figure out the code before the opposing team. The very first game of this I played, both teams received a miscommunication token the first round. That put some pressure on not to get another one so early in the game. This is a solid game and a good replacement and change up if you’ve been playing Codenames too much. Does it replace Codenames? Not at all, the game play is different enough that I can see having both in your gaming library. I also like the old electronic feel to the components. I’m of an age where I remember using floppy discs, so there’s almost a nostalgic feel to the look of this game. If you want to have fun, find an old floppy disc and give it to a kid and ask them what it did. It’s almost like old vinyl records, VHS tapes, or soon to be CD/DVDs. A critical part of technology at the time, but forgotten due to improvements. Decrypto is a fun game and if you enjoy Codenames I recommend this as a buy.