Hey folks, just going to post a recap of our monthly game night and how my wife and I prepare for hosting. Once a month, we invite anyone that wants to come over for a night of fun and games. Food and drinks are provided by us. It’s a way for me to share the games I like with others. There’s a lot of prep work that goes into game night.

First, I make sure to post on Facebook the date and time of game night. Last night was an impromptu game night. Impromptu due to only giving a weeks notice. My wife and I will look at our planner, and then decide what the best date for game night. We typically try to do a game night on Saturday nights. If both my wife and I are off on a Friday or Monday, then we might move it around the weekend. I usually like giving a couple weeks notice. 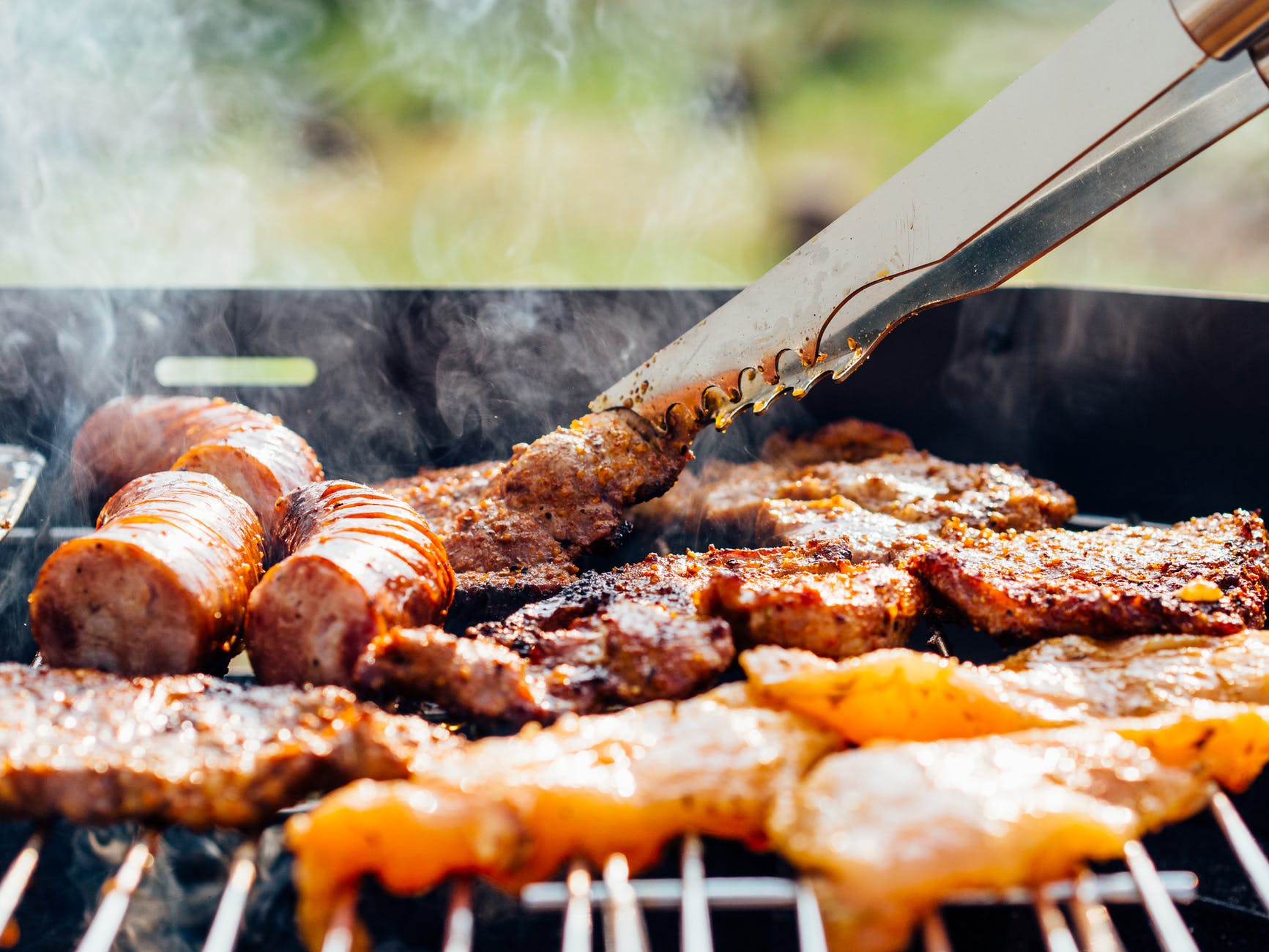 Next, we plan what we’re making food wise. I like to go with something that’s easy and not too messy. smoked brats being a favorite. About 4 hours in the smokers and they get a nice taste to them. Then I’ll have some sauerkraut and fixings for it. I’ve also done the breakfast for dinner route. Pancakes, egg bake casserole, and fruit. Or one of my favorite meals is a Mexican lasagna I make. Layers of tortilla, taco meat, cheese, rice, and beans. It’s filling, easy to make, and there’s usually plenty of left overs for lunches.

Once we get the food cooking the day of game night, we’ll do a really deep clean on the house. Usually tag teaming between keeping our tornado of kids occupied while the other cleans a room. If there’s shopping to do, one of us might take both kids to the store, and one stays back to power through the house. I like game night because it makes us do a deep cleaning every month. With kids, it’s easy to do a surface cleaning, but it’s satisfying to get that deep clean complete.

From there, we’ll set up any extra tables if we’re expecting a full house. We have our dining room table as our go to table. It’s an 8 foot table with benches and two chairs at each end. You can easily get 8 to 10 people around this table. So it’s become ideal for our high player count games. We also have our dedicated game room. It houses all our games and has a skinnier table in it. We can fit about 5 people in there if needed. Games that don’t take a lot of table space can be played in there. Then we usually have a 6 foot folding table in our sitting room for spill over. And if needed, we move a coffee table in our living room for games that don’t have many components or board. This is a last resort thing. We haven’t actually used that option yet. These four rooms are all right next to each other. It’s a really nice layout in our house. This is an old Victorian house built in 1902. We’ve been here a year, and I’m loving the ability to host these fun game nights.

So that’s how we prep for game night. We hosted game night from 5:00 to 12:00 last night. It usually starts with people trickling in, then an influx of people until about 8:00/9:00. Then usually about 4 to 5 people the rest of the night. It’s nice to be able to play games with everyone at once, but it’s also nice to play some of the more strategic games to finish out the night. We served chili hot dogs, side salads, and had pop, juice, mimosas, and a mixed juice beverage.

When our first guests came, the kids were excited and wanted to play a game. I had suggested Rhino Hero. So we played that for a round with the kids. Then several without the kids when they wanted to play upstairs. Rhino Hero is one of those simply games that you just want to see how tall you can make it. 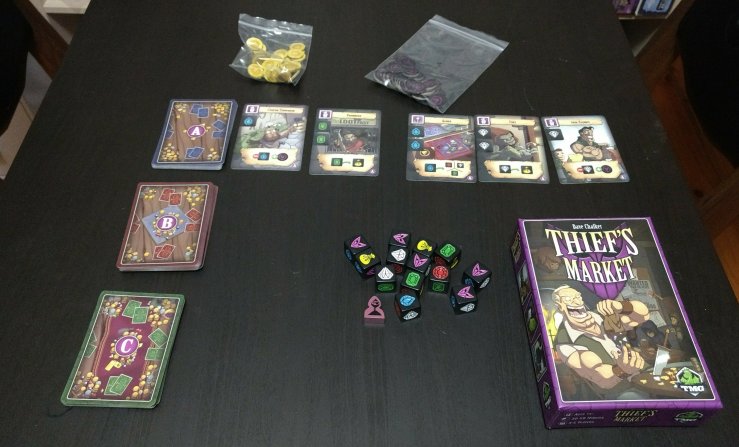 Next we tried out Thief’s Market. It’s a dice rolling, dice stealing, engine building game. The players seemed to like the stealing and looting part of the game more than the rest. We didn’t finish this one as everyone seemed to lose interest in it. No worries, there were more people showing up.

After everyone ate dinner we continued our games. Next to the table was Saboteur. This is a card laying, secret identity, take that game. Players are with a saboteur or miner. Players play tunnel cards to try and get to one of the three face down cards at the end. Miners are trying to get the gold and split it between themselves. Saboteurs are trying to stop the miners and keep the gold for themselves. This is played for three rounds, and the person with the most gold nuggets win. Roles switch each round. We played this game twice. 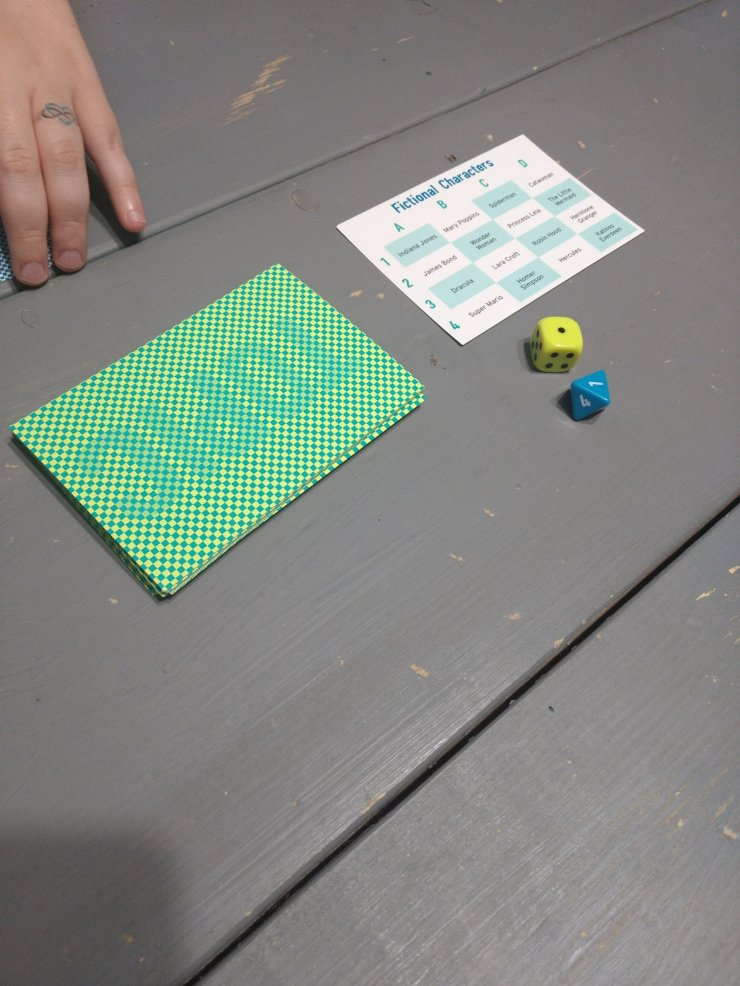 After Saboteur we broke out one of our go to larger player games. Chameleon. We don’t keep score, and we played about 10 rounds of this one. It’s quick, easy to teach, and fun to play.

Once the kids were settled in bed, we brought out Deception: Murder in Hong Kong. It’s a secret identity, deduction game. There’s a forensic scientist, investigators, and one murderer. Each player gets a random role card, 4 “weapon” cards, and 4 “evidence” cards. Each game is three rounds. Forensic scientist has everyone close their eyes. Then the murderer opens their eyes and picks one weapon and one evidence card in front of them. Murderer closes their eyes, then everyone opens their eyes together. The forensic scientist gives clues using cards randomly drawn from a deck. Discussion takes place, and each person can accuse someone only once. You have to get both the weapon and evidence correct to win as an investigator. You win as the murderer if no one can guess your cards. We played this one a lot. 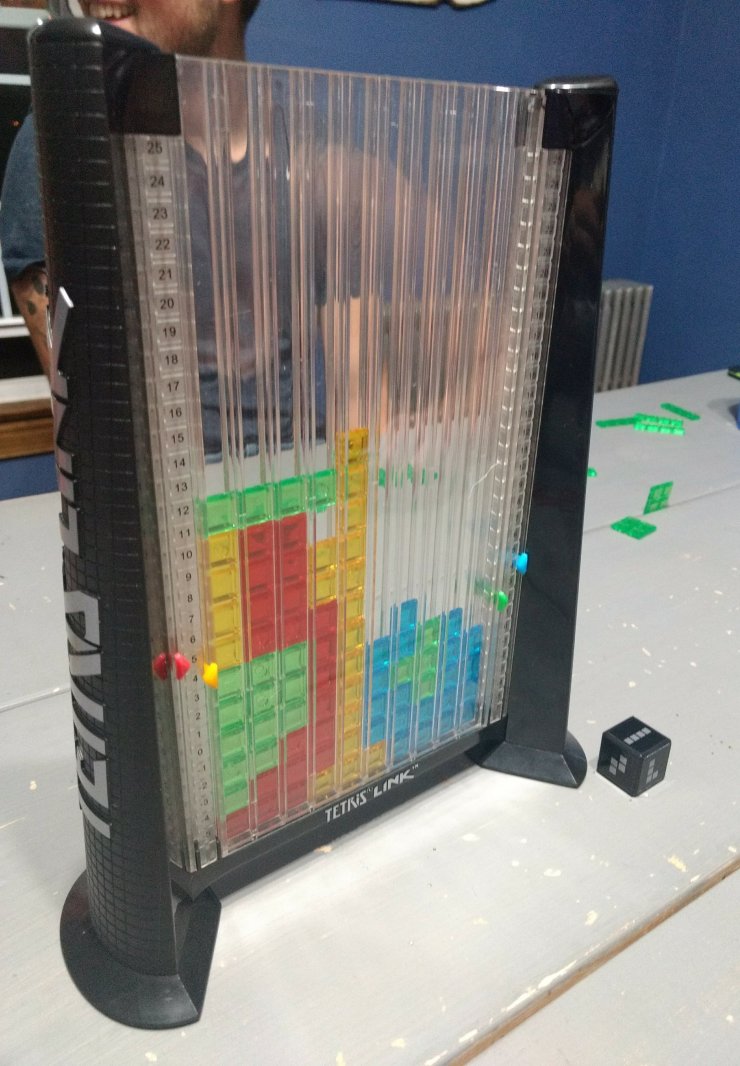 After Deception: Murder in Hong Kong, we broke out a game that we’ve dubbed “Marriage Tester.” Tetris Link is a puzzle, pattern, abstract game. Each player gets their own color game pieces. You roll a die, select the game piece rolled, and then play it on the game track. Once you get three of you pieces connected, you gain 3 points and can link to keep getting points. Sounds easy, right? First game tends to be the learning game. Once people learn the strategy of blocking other people, this game goes from fun and light game to take that and strategy. Grudges carry over from games before. It’s still a fun game. We played this about 6 times.

Then, we decided to end the night with the game that started it all. We played Rhino Hero some more. Without the kids there, we wanted to see how tall we could get the tower. As you can see from the pictures, it was intense.

So we played a total of 6 different games. We played from 5:00 to 12:00. It was another successful game night, and has me itching to get the next one scheduled. With being once a month, it allows us to budget and provide the food and drinks to our guests. We open our house up to friends of friends, family, and co-workers. It’s one of my favorite nights of the month. Any other readers have a regular game night? How do you prep for it? Any games that are your go to games?