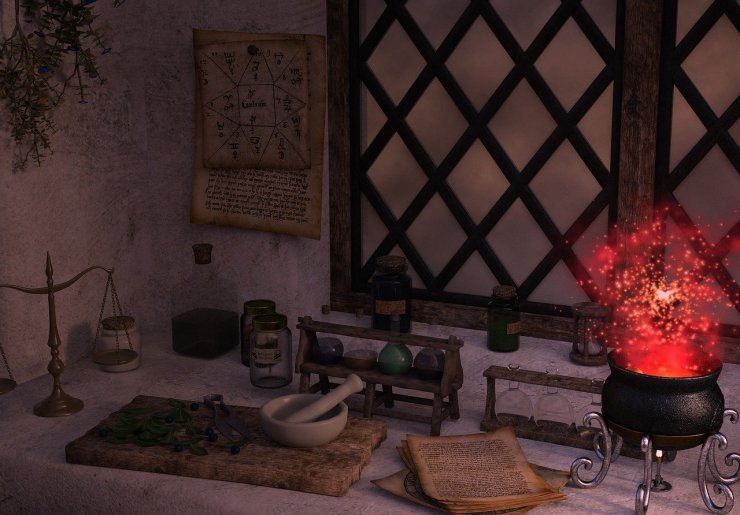 Hey folks, I’m back again. This time grab you beakers, glass rods, and four key ingredients. We’re crafting potions! This is a board game that uses marbles in a very different way than Kerplunk. See, the marbles are the ingredients and they come out of this game centerpiece. Game play is reminiscent of Candy Crush, or the current phone game that link liked color items, on your phone. The game is called Potion Explosion by CMON Games. It’s 2-4 players and takes about 40 minutes to play.

The game comes in a standard size box. It’s a bit heavier than it looks. It comes with the rules, the dispenser, 1 first player token, 4 player desk boards, 15 skill tokens, 18 help tokens, 64 potion tiles, and 80 marbles. There was also a set of extra marbles in my box. There are 8 different types of potions, with each potion set having 8 potions in it. There are four different colored marbles. So it comes with 20 Blue, 20 Red, 20 Yellow, and 20 Black marbles. The dispenser needs to be punches out and built before your first play. So when you get this game, it’s not an open and go type of game. It took me about 30 minutes to punch out everything and build the dispenser. The object of the game is to get the most points. You’ll do this by finishing potions and getting skill tokens. You’ll lose points when you ask the professor for help. It’s not that bad, as it can help set up for good explosions.

The dispenser is the nice eye candy. Pour all the marbles in the top of the dispenser. They’ll travel down the slanted tracks to display what’s up for grabs. The marbles come in four colors or ingredients. Blue Marbles or Unicorn Tears. Red Marbles or Dragon Smoke, Yellow Marbles or Fairy Dandruff. And lastly, Black Marbles or Ogre Mucus. The art on the box makes it look like an old box. Player boards are made to look like your desk in a class of learning potions. I haven’t been to such a class, but imagine it’s exactly the type of desk Harry Potter sat at. Each desk has two Bunsen burners to place your potions on and a beaker to store unused ingredients. 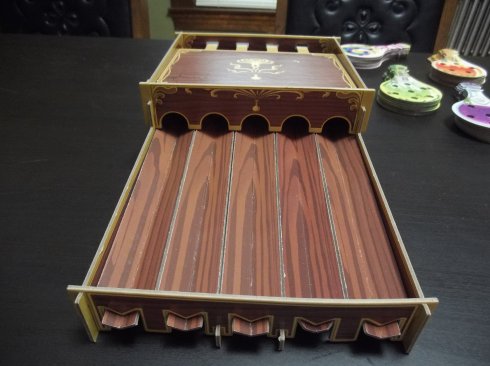 The potions tiles are shaped like potions. On one side, it shows what the potion looks like when finished. On the other side, it will be broken down into different layers of colors. On each layer, there will be a spot to place 1+ marbles. Just under the cork of the potion is a symbol showing what potion type. Then, on the left side of the potion is a number in a ribbon. This is how many points the potion is worth when completing. When you complete a potion, you can drink it. Doing so will have a different effect on the game. 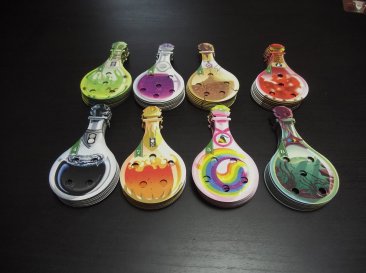 To set up, dump all the marbles in the dispenser. Sort each potion into piles. Make sure to pull out any potions with a star on it and place those on the top of the pile. Pick 6 potions to use for the game. The remaining 2 will be placed back into the box. Once you pick out the potions, take all the star potions and shuffle those up. These are the starter potions and will help get the game moving. They’re easier to finish, and don’t give a lot of points when complete. Place these with the finished side up. Players will take turns selecting the starter potions until everyone has two potions. Next, you’ll shuffle the left over potions into all the other potions. You’ll want to shuffle them good, the idea is to have random potions in 5 different stacks. Place out the helper tokens. Next, depending on the player count, set out skill tokens. Now, it’s time to craft.

To play the game, the first player can do the following actions. At any point in your turn, you can drink one or more potions or ask for help from the professor. If you ask for help, you take a help token (which is -2 points at the end of the game) and can take any ingredient from the dispenser. It doesn’t cause an explosion. Each player has to take one ingredient a turn. After you take one ingredient, and the marbles slide down, any two or more ingredients that touch on the same track causes an explosion. You collect those marbles too. This can go on until you don’t have two of the same ingredients touching. So if you had a yellow marble with a red marble above and below it, you could take all three. Grab the yellow, then the two red touch and you get those too. Once all the ingredients are collected, you can start crafting your potion. Match the colors in your potion with the marbles from your ingredients. If at the end of your turn you still have marbles, you can place up to three in your beaker for later use. Anything beyond those three go back to the dispenser. If you finish a potion, you return the marbles to the dispenser, move the potion to your completed area, and at the end of your turn draw a new potion.

Okay, but what potions do you want to take next? Well, the skill tokens are like achievements. When you collect three of the same type of potion or 5 different potions you get a skill token (each worth 4 points at the end of the game). The end of the game is triggered when the last skill token is taken. So keep an eye on what people are taking and what you need to get those tokens. Once the end of the game has been triggered, play continues to the player to the right of the first player. This ensures that everyone has had the same number of turns. Once the game has ended, count your potion points, subtract any help tokens, and add any skill tokens. The player with the most points is the head of the class and the winner.

So, what are my thoughts on this game? It was one that I wanted to play for a long time. My wife likes games like Candy Crush on her phone, so I immediately thought this would be a good family game. I was right. My wife and I enjoy playing this game. It’s easy enough to teach, but takes a bit to play depending on how many players. It’s easy to get analysis paralysis in this game. Trying to mentally figure out what explosions to make. I like the tactile feel of the dispenser and the sound of the marbles clinking together. It really adds to the game. The insert is nice with a spot for everything, even the dispenser when fully assembled. I didn’t like how long the set up takes. In my opinion, the sorting of the potions and then shuffling was too tedious. Cards I can shuffle no problem. Weird shaped potion tiles are a pain. I haven’t exactly figured out a good way to shuffle them. Does that overtake the game, and make me not want to recommend it? Not at all. I highly recommend this game. It’s so different than any other game I’ve played due to the dispenser. It’s a novelty, but it works. Anyone that’s played one of those cellphone games will be intrigued by this game. I like the game so much, that I’m keeping an eye out for the next expansion for the game. Potion Explosion: The 6th Student adds 5-6 players, a plastic dispenser, and two more potions. The previous expansion, Potion Explosion: The 5th Ingredient, added a wild ingredient and 4 more potions. I haven’t played that one yet, but will probably get that at some point too. Once again, I highly recommend this as family friendly game.