Hey folks, it’s a birthday weekend celebration here. So far, we went to Build-A-Bear and Jeepers. Jeepers is a Chuck E Cheese type establishment minus the animatronics and millions of kids running around. We celebrate Kenzie and Landon’s birthday together. Their birthdays are 10 days apart. They’re younger, so we can get away with that for now. Needless to say, I haven’t gotten a chance to get the pictures needed for reviews I have ready. So, I’d thought I’d take this time to talk about some of the upcoming games I’m excited to try out and an update to my blog page.

First up, is the follow up to Azul. Azul: Stained Glass of Sintra is slated to be released in October of 2018. It looks like it uses the same drafting mechanic that Azul uses, but has modular player boards. This one is from Next Move Games. If it’s anything like Azul, then count me in. This is a 2-4 player game, and the components look gorgeous. Sagrada already does a stained glass theme, but with dice. Will the game play of Azul: Stained Glass be that much different than Azul and Sagrada that it will bring something different to the table? We’ll have to wait and see.

Next, is a mash up. It’s taking Between Two Cities by Stonemaier Games and mixing in Castles of Mad King Ludwig by Bezier Games. To love child of these two games is called Between Two Castles of Mad King Ludwig. It’s a tile drafting game where each player is building two castles. Both of those castles are joint efforts by other players. The lowest of score of the two castles you’re building will be your score. The tile drafting reminds me a lot of Sushi Go. This is 2-7 players and looks like fun. This one is scheduled to be released in October as well. There are already a couple of pay through videos of this online. 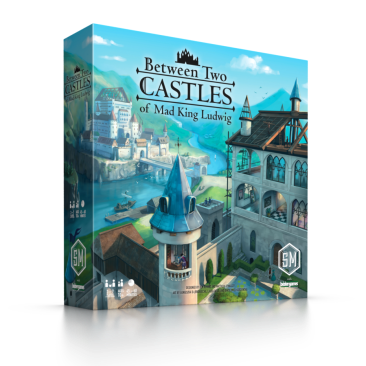 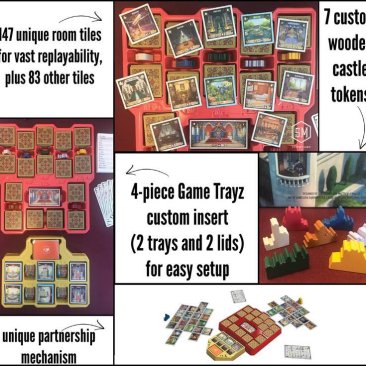 Lastly, there’s a game coming from Czech Games Edition called TrapWords. The same company that makes Codenames. This is also a team based word game. It’s a fantasy dungeon crawl themed. Each team gets to look at the word the other team is going to try and guess. Depending on how deep into the dungeon the team is, the other team gets to write down trap words. If one of those trap words are given as a clue by the other team, their turn ends. So you’re trying to think of words the other team’s clue giver will give about a word. As the clue giver, you’re trying to skirt around obvious clues and not get trapped. I like Codenames, so I’m pretty excited to see this one with a dungeon crawl feel to it. This one is scheduled to come in the last quarter of 2018. I haven’t seen a set date yet.

As an update to my blog, I’ve added a recommended games under the menu. This is linked to my Amazon account. If you’re looking to purchase any of the games I’ve reviewed, the link will be there. As a bonus, anything bought from that link, I’ll get a small percentage of the sale. When I’ve gotten enough, the money will go back into the blog for new games to review or hopefully some contests. Hopefully this will help me get to the next level with blogging about board games.