Hey folks, I’m back again and guess who’s coming to our town. That’s right, it’s the emperor again. We’ve sailed the seas dodging sea monsters to boast about him. We’ve built pagodas for him. Now what are we going to do? Well, celebrate all our hard work and the emperor with a lantern festival of course. Lanterns: The Harvest Festival is a 2-4 player game from Renegade Games. It doesn’t actually say the festival is for the emperor, but I just assumed it was due to all the other stuff we’ve done for him. This game is a set collection and tile placement game. It uses tokens, tiles, and cards. 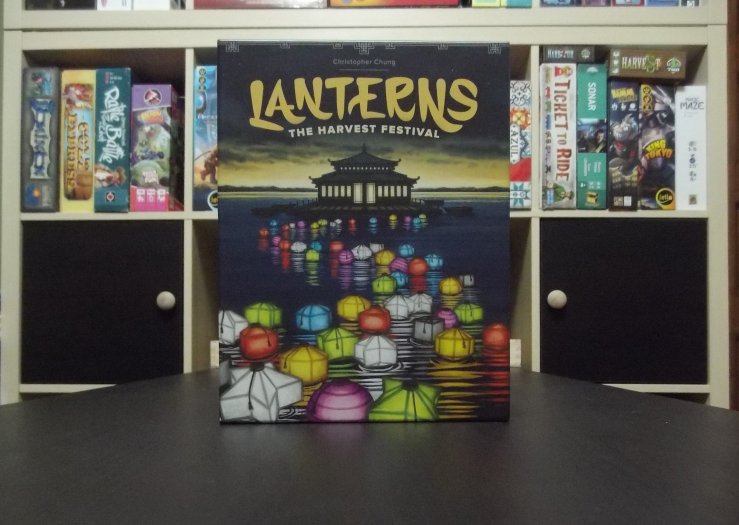 The cards come in seven different colors. Orange, Green, Purple, White, Blue, Red, and Black. Each color has 8 cards. The Lake Tiles are square and there’s one starting tile with a boat on it. Each other lake tile has different color lanterns on each side of the tile. Some lake tiles will have a platforms in the center. These will let players earn favor tokens. The Dedication Tokens come in 4 different colors and dots on front. Green has a dot of each lantern color on it. Blue has three different sets of different shades. Red has for dots of the same shade. Then the gray one just has 4 on it. Each set of these will have different numbers on it. These are how you earn points in the game. Lastly, the start player token and favor token are chunky wood components.

To set up the game, you’ll need to arrange the seats like if you were sitting at a card table. You want one person on each side of the table, this will make game play a little easier to follow. You’ll separate the lantern cards by color and set them in a row for all players to take. Depending player count, the number of cards will be reduced. Four players use all the lantern cards. Three players use 7 of each color. Two players use 5 cards. Next, you’ll shuffle the lake tiles and count out a certain amount depending on player count. Four players uses 32 tiles. Three players use 27 tiles. Two players use 12 tiles. Next, deal three lake tiles to each player. You’ll sort and set up the dedication tokens now. You’ll stack each set with the highest number on top descending in numerical value. Use al dedication tokens for four players. Three player games will remove the tokens with 4 dots on them. Two player games will remove the tokens with 4 and 3 dots on it. Flip the starting tile over so you can’t see the lanterns. Spin it a couple of times, center it and have each side facing a player. Flip it over. The player the red lanterns are facing will be first player. Then, give each player a lantern card of the color facing them.

Now for game play. Each player’s turn is broken down into steps. You have to do these in order. First, you can exchange a lantern card. To do this, you need two favor tokens. You’ll exchange the two tokens and one of your lantern cards for an available lantern card on the table. Secondly, you can make a dedication. You can only make one dedication a turn. You’ll turn in your collected lantern cards for a dedication token. The red dedication requires 4 of the same color lanterns. Blue requires 3 pairs of different colors. The green dedication requires one of each color lantern. When you turn in cards, they go back to the table in the correct pile. You’ll then grab the top dedication from the stack. Lastly, you must place a lake tile. You select a lake tile from your hand and place it next to a tile on the table. If you match any colors to a tile already played, you get that color lantern card. If you play a tile card with a platform and match a color or match a color to a platform, you get that color lantern card and a favor token. After collecting these bonus cards, you’ll then deal a color lantern card to each player depending on what color is facing them from the newly placed tile. You’ll draw a new tile and then it’s the next players turn. Since there are limited lantern cards in a game, it is possible to not get certain colors if players deplete a pile. If there’s not blue lantern cards on the table to draw, no player can gain those until someone turns blue lanterns in for a dedication. The game ends after the last lake tile is drawn and placed.

That’s the game. Lanterns. It’s a game of tile placement, set collection, and matching. Where you want to be the first to make dedications, but not make all the same dedications due to the points going down. What do I think of this game? It’s a great tile placement and set collection game. The components are well done. I like how the tiles and tokens feel. The cards are a little smaller than the standard sized card. It works though, as you wouldn’t want anything larger. I like how gaining lantern cards work. When you place a lake tile, you’ve got to be mindful of the other players and what they are collecting. I could turn this tile this way and match two cards, but my opponent will gain the color they need to make a dedication on their turn. There’s a lot of choices to make during your turn. Each step has some thought that goes into it and some tough decisions. From exchanging a lantern card to deciding what dedication to take makes this game a great game in my opinion. This is an easy game to teach and learn. I can see this being added to anyone’s collection that enjoy tile placement games and set collection. The one downside I had was the game insert, or lack of one. I like my games to be easily set up and put away. With the insert that was included in the game, the tiles and cards would slide all over each other when you transport the game. An easy solution was stackable crayon boxes. So not too bad, but just the one thing I didn’t like about it and not game play related. Overall, this is a fun and easy game to play.