Hey folks, I’m back again with a game to share. This game is The Game. No, honestly. This is The Game. The name is “The Game” and it’s a card game by Pandasaurus Games and IDW Games. This game was nominated for Spiel des Jahres in 2015. This is a card game for 1-5 players and can play in 20 minutes. It’s taken us a bit longer due to the hard choices when playing. This is a cooperative game where you’re trying to work together to get rid of all the cards in the shared deck. I want to say I’m not a huge fan of the name, but I will often play into it because that’s just who I am.

“What game do you want to play?”

“The game. Just grab the game and come out here.” 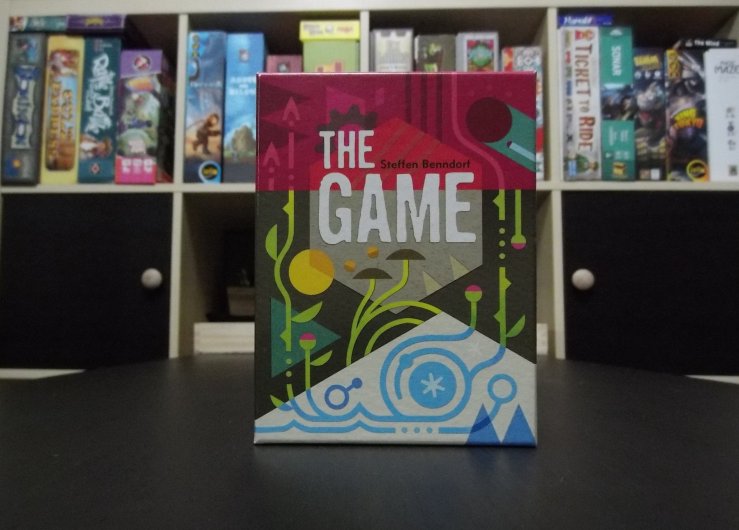 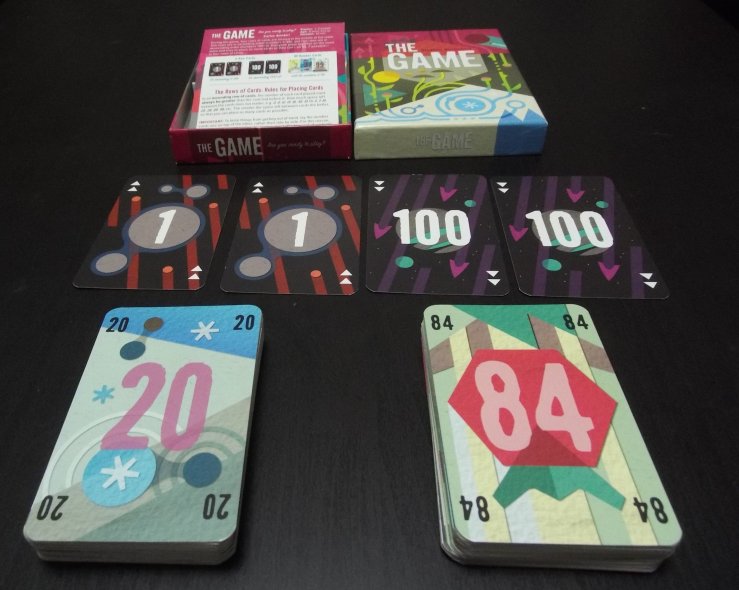 To Set up, you’ll place the 1s and 100s on the table into separate piles. Next, you’ll shuffle the 2-99 cards really good. Depending on the number of players you’ll deal out the cards. For a 1 player game, you’ll get 8 cards. For a 2 player game, each player gets 7 cards. In a 3, 4, or 5 player game each player will get 6 cards.

To play this game, you’re going to be playing at least two cards a turn onto the 1 or 100 piles. Cards need to be either ascending or descending in numerical order. Meaning that you can’t have a higher or lower number than the top card depending on which pile you’re playing on. Did I mention you can’t communicate what numbers you have? You can say stuff like “I have the perfect card for that pile” or “Don’t play there!” You can play as many cards as you want from your hand. At the end of your turn, draw back to your starting number of cards. Once the draw pile is gone, each player only has to play 1 card. Everyone wins if all the cards are played and gone. Everyone loses if at least one player can’t play the minimum cards required. 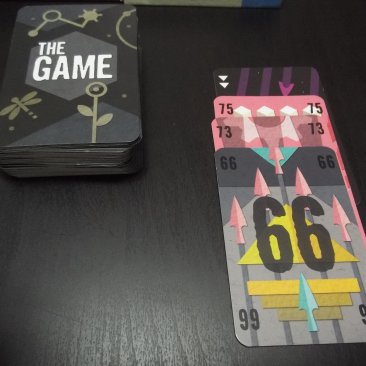 That’s the game. It’s easy to explain, but hard to play. This is a cooperative game, but often you’ll feel anger towards your teammates. How could you jump that pile 30 numbers! What were you thinking? I had something to play there! The box suggests 20 minutes, but our games took longer. The choices and consequences are huge in this, so it’s easy to get paralyzed while looking at your cards. What one do you play, will you screw someone else over, if you don’t play it will someone else screw you over? Ultimately, if someone gets screwed over, everyone gets screwed over. There are a couple versions of this game out. Currently Target has the edition I played. The artwork changes from range of numbers. It makes it easier to sort when it’s in your hand. The old artwork looked like some horror movie theme, where the newer one has pleasant artwork that reminds me of an Eric Carle book. This game is heavy with choices and consequences. I enjoy this game because of that, and that it’s a card game where everyone is working with each other. I recommend this little card game for anyone that’s looking for a cooperative game and that likes number games.

3 thoughts on “The Game Review”