But wait! There’s more! It’s been a while since I posted a review, so I wanted to post two in a day. As a follow up to Really Bad Art, I wanted to post a review of A Fake Artist Goes to New York. From what I can tell, the story behind this game is a fake artist is entering an art show. Everyone worked hard on their painting for a gallery that shares the same theme, except one artist that tried to pass off his second hand painting as original. This is also a party game for 5-10 players, and plays in about 20 minutes. The designer is Jun Sasaki and it’s published by Oink Games. Jun Saskai is CEO of Oink Games, and has made some tiny box games that have a big feel them. This game is a social deduction and bluffing game, similar to Chameleon.

The tiny box comes with 10 different colored markers, 9 white board tile cards, 1 dry erase marker, 1 pad for drawing, and the instructions. All in a sleek tiny box that can fit in your pocket.

To set up this game, give each player a colored marker. Pick one person to be the Game Master. Give that person the white board tiles for how many players minus one. This accounts for the game master sitting out. Next, the game master will choose a simple word to draw. They want the fake artist to win, because they win as well. The game master will write that word on all but one of the tiles. Make sure no players see the word. The one tiles that doesn’t get a word written on it gets a big X. That tile is the fake artist. Mix the tiles up, and pass them out to the players. 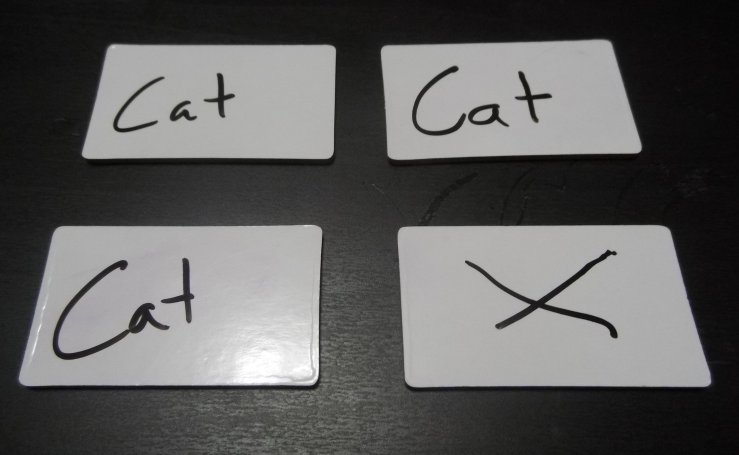 The true artists know what word they need to draw. The fake artist is clueless. Starting to the left of the game master, each player is going to make one line on the drawing pad in their marker color. One line can be squiggly, curved, zigzags, or an angle. It all goes on the same piece of paper. Each player is adding to the previous players line or drawing. This process goes around twice before there is a vote. After each player has added two lines to the drawing, there will be a vote. Players are looking for the fake artist, the fake artist is trying to not get caught. After each player has added two lines to this wonderful masterpiece, the game master will count to three. When he reaches three, the players will all vote for who they think is the fake artist. If majority vote goes to the fake artist, that player gets one guess to guess the word. If they are correct, they win. If they are incorrect, the artists win. The game master wins if the fake artist wins. You can keep points for artists winning and fake artist winning, but this is one of those games you just want to keep playing not don’t care much about the score.

This is a suburb party game following a type of game my group likes to play. Once again, you don’t need to be good at drawing because it’s one line you’re adding at a time. I like hidden identity, social deduction, and bluffing games. This game has it all, and fits in a tiny box. It’s a little pricey for what it does, and can easily be duplicated using some crayons and scrape paper. The dry erase marker that came in the box was dried up when I first played the game. The other markers still worked though. Like I said before, this is a game you want to keep playing and don’t care about scores. This game reminds me of Chameleon in the sense of trying to blend in as the fake artist and each player going around adding knowledge to the artwork, showing that they know what the word was written. Unlike Chameleon, this game doesn’t have a list of words to pick from or themes to use. Some of the words we used were squid, smelly shoes, and football. I can see some people having a hard time coming up with a word to draw, so I’m not sure if having a list of suggests or examples would come in handy. This is a quick and fast game to explain and play. It supports up to 10 players, which is something I get frequently and why I wanted this game. The one downside to this game is it doesn’t do well with color blindness. The point of the different colored markers is to be able to tell who drew what.  There’s too many similar looking colors that wouldn’t work well with color blindness at the full player count. If you regularly host game nights and have larger crowds, I would suggest giving this one a try. You can do that simply by having 10 different colored crayons or markers, a drawing pad, and some scrap paper to write words and an x on. If you like it, buy the game and support the designer and game company. The dry erase boards are really nice for this game, as they sturdy and you can’t read through them. This one gets a Game Night approval.

Oh, the fake artist was Red. Purple was close, but the last squiggle they drew was meant to be a tail.  The red artist drew a line near the bottom of the drawing that didn’t fit. Their next line was making the mouth of the cat into an X. Green fixed that with quick thinking.  Really though, this is a fun game. 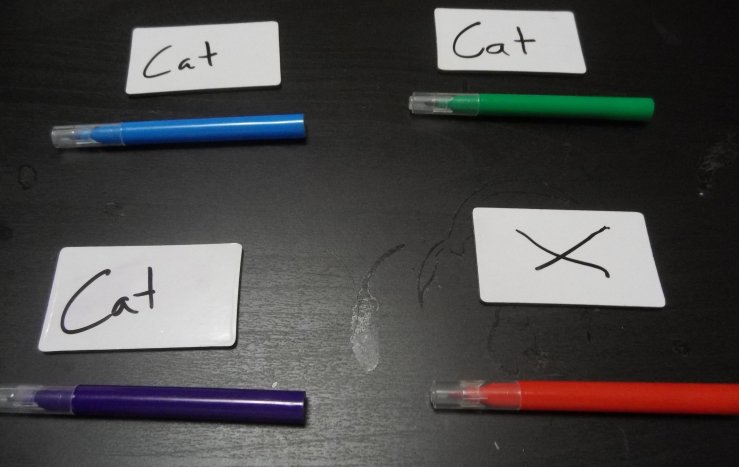