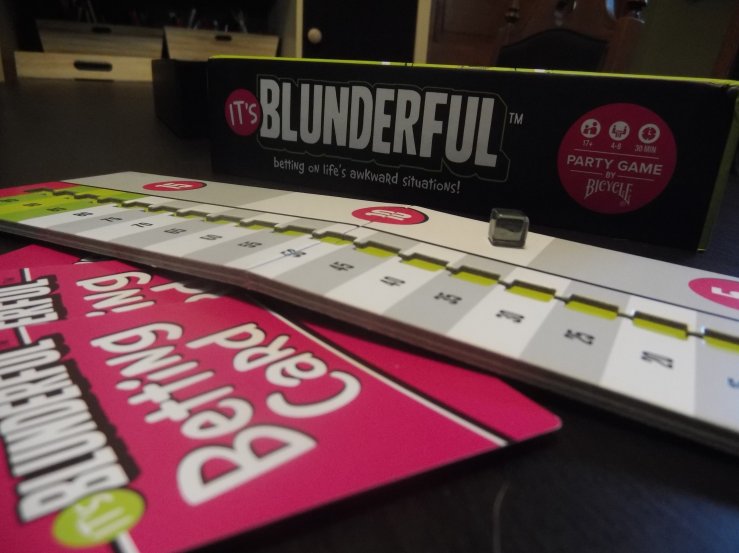 Hey folks! Back again with another game review. This time, the game was provided by Games by Unicycles. Games by Unicycles is a company best known for their decks of cards. They have started to branch out into board games.

Let’s set the mood. Here’s a statement, and guess what I would answer.

I start my review off by getting the name of the company wrong. Do I:

A. Apologize until I’m blue in the face.

B. Keep getting the name wrong.

C. Play it off as a bit for the intro.

Well, what do I pick? Of course I went with B. Games by Unicycle is a great company. Just kidding. C. The name of the game is It’s Blunderful and it’s published by Games by Bicycle. They are the playing card company, that’s been putting out board games. Great move, as I love board games and the more the better!

It’s Blunderful is a party game about awkward situations. It’s for 4-8 players and plays in 30 minutes. It’s recommended for ages 17 and up. The first player to get 100 points wins! You can’t put a price on good friend, but you can certainly bet on how they would do in awkward situations! 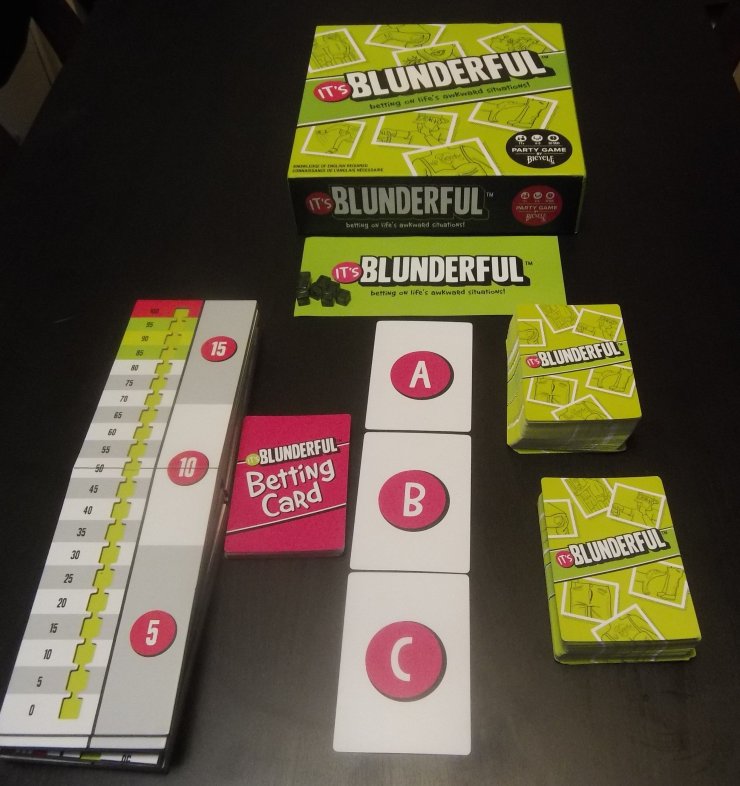 Betteing cards come in A, B, and C for each player. 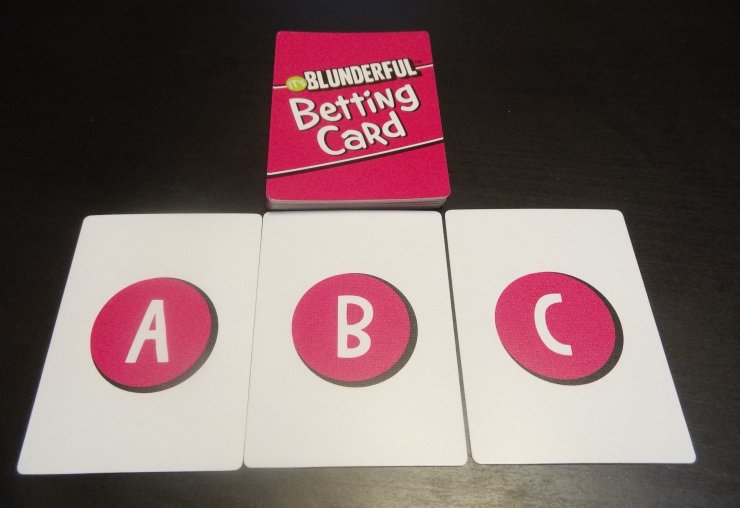 Blunderful cards have the blunderfully awkward situation in the green and the choices in the white on the card.

The player boards are dual layered, they have a spot where you can put the score cube and a spot to place your betting card on the right. Bets can be 5, 10, or 15.

To set up It’s Blunderful, you give each player a player board, a score cube, and a set of betting cards A, B, and C. Place the deck of Blunderful cards face down near the center of the table. Players start with the score cube in the 0 spot. Pick a player who goes first. Any way will do, but if you want to stay true to the game just go with the person who’s been in an awkward situation last.

Game play starts with the player who goes first. They draw a Blunderful card and read it out loud. First, they read the situation. Then they read all the choices starting with A. After they’ve read it out loud, the reader will select what option they would most likely do. They do this by selecting the corresponding A, B, or C card from their hand and sets it face down in front of them. 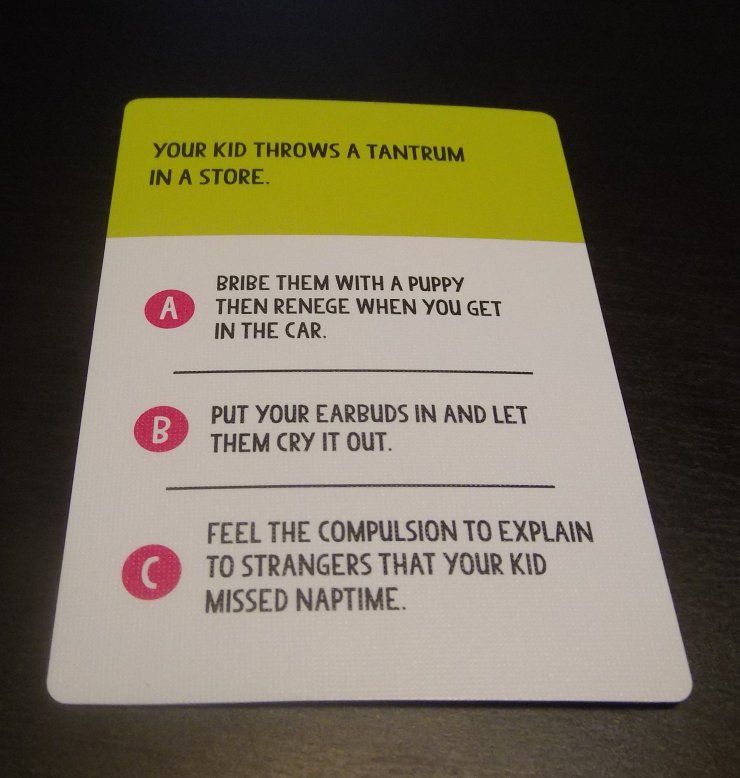 Next, the other players will select what they think the reader chose and places their bets face down on the number of points they want to bet. So if you are a little unsure on how the reader would answer, you’d bet lower points. If you’re confident you know what the reader will pick, you put that choice all the way up to 15!

The reader reveals their answer. Players that picked the correct answer, goes up the by the amount they bet. Players that didn’t get the guess correct, go down the amount of points they bet. Then it’s the next players turn to become the reader. Play continues until someone reaches 100 points on their player board. If there is a tie, then the other players who didn’t tie will read blunderful cards. The tied players will bet on them. Play until one of the players wins and the other loses a bet. 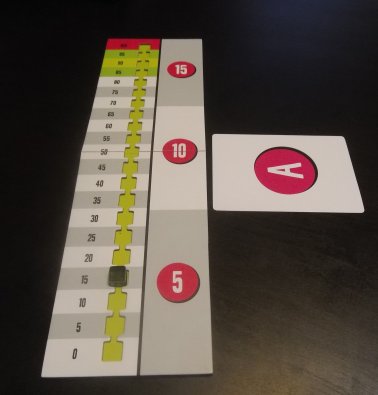 I like the components. Even though it’s mostly cards, the player boards are dual layered! You don’t see that too often in games, and this one makes it functional. It holds the score cube in nice and tight, and if you’re moving around the table, and placing your bet cards on your board it’s nice that the markers stay put. There’s really only the art on the front of the box, but everything has a nice clean look to it.

The game play is refreshing. There’s a lot of games out there that follow the format of player reads situation. Other players pick a card. Reader judges what card they liked best. Not only is this game still putting forth awkward situations, but it has the reader picking what they liked best. Then the other players are betting points on what they think the reader has picked. This is a breath of fresh air for this style of party game. I found the game plays best at the higher player count, and I don’t see any reason you could have teams to up the player count even higher. Just when it’s your team’s turn to read the situation, take turns with your partner. One thing that was coming up for the reader was saying they wouldn’t do any of those options. While an option “D. None of the above” could fix that, I feel like it would take away from the game. This is meant to put people in awkward situations, and if a player would pick “D. None of the above” that is an easy out. It plays fast, and it has a set number to reach before the end of the game. Sometimes a game can outlive it’s table time. This is where I find this game got it right. The situations are awkward enough that you can play with friends, but not overly awkward where you can’t look Grandma in the eyes while reading it. There are laughs around the table while playing this game. And moments of “You would really do that?” followed by reasoning. I recommend this for anyone that’s looking to add another party game to their collection and looking for something other than the Apples to Apples format. Good job Games by Bicycle. I can’t wait to see what else comes out by this company.

Please note – It’s Blunderful was a review copy provided to me by Games by Bicycle.