Day 4 of social isolation. I ended up playing a solo variant of Terror Below. This is an interesting pick up and deliver game based on concepts of giant worms that like to eat anything that makes sounds. These giant wurms, will hone in on anything that makes a sound and when it targets in, it will erupt from the ground and shoot debris everywhere. What you’re looking for is some of the wyrm eggs. These babies will fetch you a good price when you sell them.

Terror Below has you heading a team of three characters. One character is your leader and has a special ability. It’s action point game with a twist. Pandemic, Forbidden Island, Flash Point, and Horrified are some of the popular action point system games that come to mind. Each one of those, the player will choose a character and that character has a set amount of points associated to them. What Terror Below does is base the action point system on the vehicle cards you use. The faster the vehicle, the more noise it makes. You play these on one of the three worms that are on the board. You use the action points, then move the worm you played it on according to the card. If a worm has a certain amount of cards on it, it pops out and attacks!

Combat in this game is pretty simple. You use a weapon card, add the damage to the worm, if it’s a card that has you roll a die, you roll the die and see if you damage it. You kill it, good. You don’t kill it, bad. It kills your leader. You rotate it out, and then you have an option later on to go to the hospital and revive them.

I like the player tokens in this game. You’re not a pawn, a cut out, or a miniature. You’re moving around a little wooden card that represents your team. 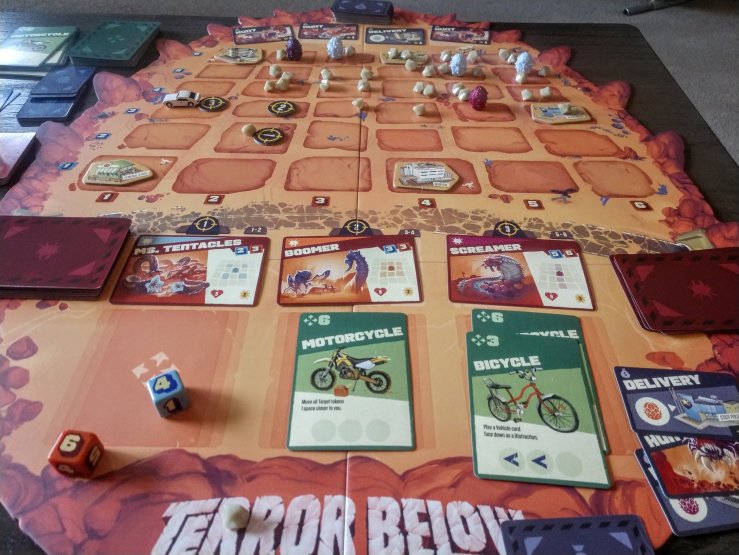 Well, I lost. I didn’t get the points fast enough and the worms ended up destroying the top half of the map. Maybe next time.

Tremors, Graboid, Kevin Bacon! Sorry, you can tell that the game takes a lot of inspiration from these.  If you pick up this game, Kevin Bacon even gets a special thanks at the back of the rules book.