Day 18. I played Smash Up.  This is a unique game that smashes two different factions together to see who would win.  This is my sons favorite game to set up, and not play.  He can’t sit long enough to play, and the strategy of what and where to play the actions and minions are difficult for him. I still encourage him to sit and help me make decisions.

Smash Up has a ton of expansions. I was lucky enough to get a majority of mine second hand. Once again, I’m going to praise shopping used games on a budget.  There I was, at my go to store for used books and games. Sitting on the shelf is the Big Geeky Box.  I had the base game and one expansion at this point. I wanted to get more into the expansions and the different combinations. I thought I would eventually need the storage, so I went to look at it.  Priced at $24, I simply couldn’t pass this up.  Then I picked up the box. It was heavy, and seemed like it was too heavy to be just the box.  When I got home, I found out why it was heavy. Inside this box was two base games, Awesome Level 9000 Expansion, The Obligatory Cthulhu Set expansion, Science Fiction Double Feature expansion, Monster Smash expansion, and Pretty Pretty Smash Up expansion. This gave me three base game sets and two Pretty Pretty Smash Up expansions. So I decided to pay it forward. I gave a base set and the Pretty Pretty Smash Up expansion to a friend just starting out in the board game hobby.

Ok, story about the cool find aside. This is a take that card game about area majority. You’re mixing two factions who have different tactics together.  Then trying to win bases and collect points. On a players turn, they can play an action and play a minion to a base. When a base has minions with combined numbers equal to the base it scores. Each base has a different ability. Usually players with the majority get the highest points. When someone has 15 points at the end of a turn, the game ends and the player with the most points is the winner. 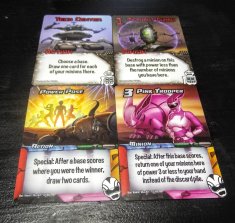 What I like about this game is the endless possibilities. I say endless to exaggerate a ton of options. Last game I played Robots and Mega Troopers. You can be Ninja Pirates, Zombie Dinosaurs, Steam Punk Princess, Kitty Kat Werewolves, and so on.  It’s almost like the ultimate who would win, with a twist.  Each game feels different due to the bases and factions playing in them.

Day 19, I played Red Dragon Inn. I know what you’re thinking. Red Dragon Inn,  during social distancing? This was a test. Earlier in the week, I split up my Red Dragon Inn collection, sent it out with player mats, coins, and drink decks that were as equal as I could make them.  Usually the game is played with a 30 card drink deck, this time we played with multiple 20 card drink decks. We played remotely. It worked better than I thought. There was some book keeping with some characters, but overall not too bad.

Red Dragon Inn, like Smash Up, is a take that card game. Like Smash Up too, it has a lot of expansions and characters to play. When playing games, I love it when there are options and where depending on the characters the game can feel different. 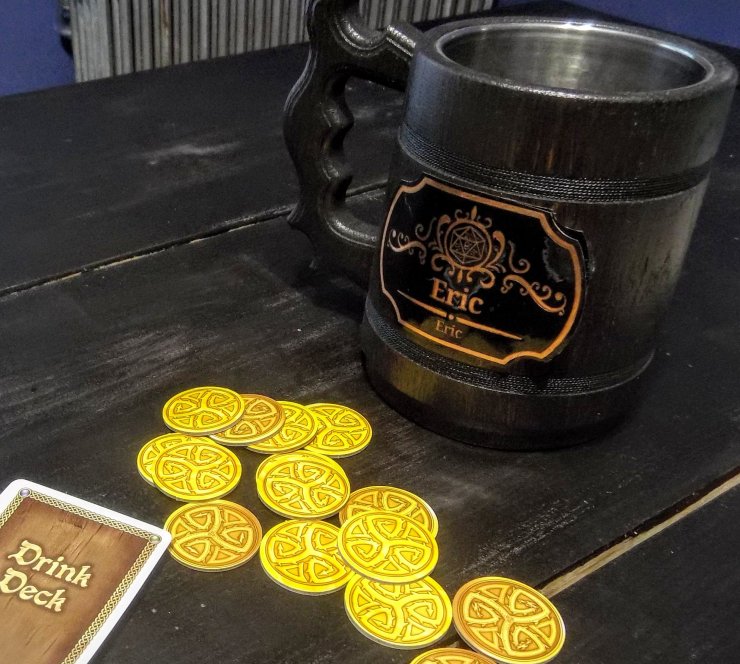 Each game, the players start with 20 fortitude, 0 alcohol, a number of gold coins depending on player count, a character deck or decks, and a drink. Always start with a drink. Make sure the Drink Deck is nearby.

The game is played in turns. On a players turn, they do the following.

When a player plays a Gambling I’m In card, a round of gambling starts as the game pauses. Each player puts in a coin to ante. Continuing in turn order, the next player can take control of the round by playing a gambling card or pass. Then the next play can do the same. When no one has played a gambling card or everyone else has passed and it goes around to the last person to play a gambling card, they win the pot and all the coins.

There are cards that have a player lose fortitude. When this happens, move the tracker down. When a player drinks a drink, their alcohol moves up. Move that tracker up.  If the two trackers ever met, you pass out.

If you run out of coins, you can’t pay your tab. The tavern throws you out.

Last one standing is the winner! Drinks to that!

This is such a great card game.  It’s so interactive, it’s so light and fun. Each character feels like the add to this world and you can picture just sitting in this tavern with a bunch of different characters. The rowdiness and fun.  The jokes. Each card has a funny title, funny art, and does some funny things.  This is like all the Dungeon and Dragons games I’ve played to date, summed up, and made into a game of hilarious actions and reactions. 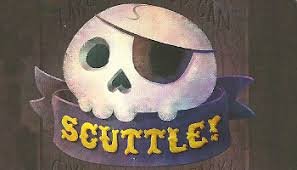 Day 20 I printed and played Scuttle! This was the first game I wanted to try and print and play. Ink had just came in through Amazon, and I was itching to try some print and play games. I recently posted about this here.

Scuttle! is a card game about pirates and doubloons. It’s a light card game and one that had inviting art. It’s one that’s easy enough to play and encourage my kids to play.

First pirate to 21 doubloons wins. You start the game with 4 cards from the deck. Each turn you can do the following.

Cards can be played as treasure when they have numbers on them. Place them in front of you, this is now part of your treasure collections. 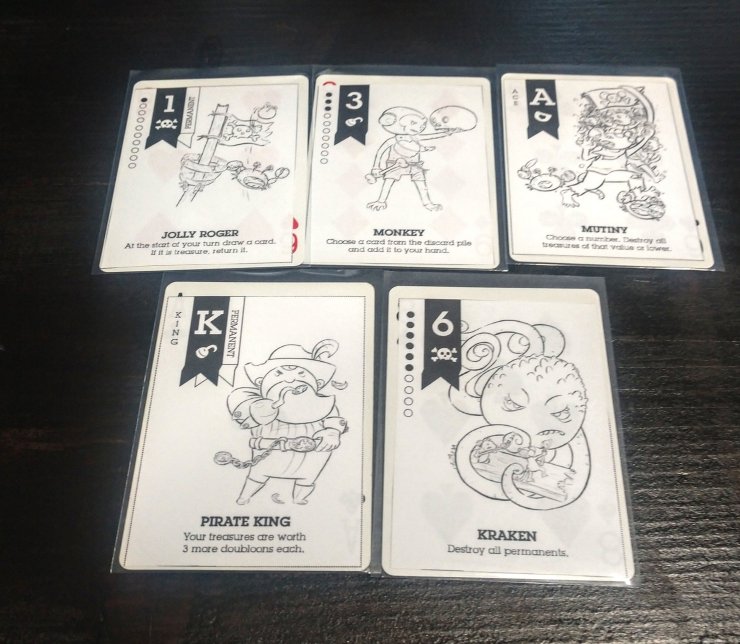 The other thing you can do is play a card for it’s text or action. Do what the card says, then discard the card after use unless it says permanent on it. Then it stays out.

This is a fast game, and it has the players make decisions when playing cards. I like that the cards have two options. Best of all, it was a total of 9 pages to print out. Perfect for a first print and play trial run.

Mechanica is a conveyer belt building game about cleaning robots.  These robots might have alternate motives, but that’s not your job to decide. Instead, it’s your job to make sure the factory making robots runs effectively and efficiently.

This game is played until the improvement stack is depleted. The player with the highest points is the winner. You get points from your total money and value of improvements. Money can be in your wallet, and what you use to purchase upgrades, or in your vault.

Each player starts each turn by running their factories.  Move each robot on a track to the next hole. Then activate any upgrades with a robot there.

Robots come in 3 different colors and values. White is the lowest and is worth 2 coins, Orange is worth 4 coins, and Purple is worth 6 coins.

On a players turn, they do the following. 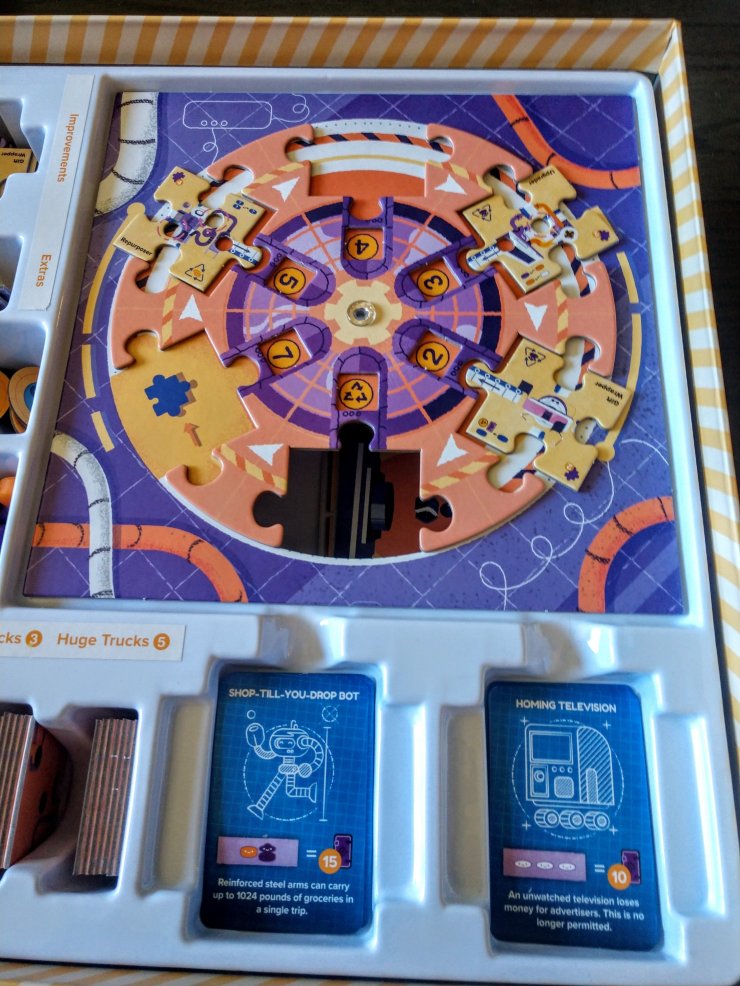 Then it’s the next players turn. When everyone has taken a turn, a new day starts and players run their factory.

During the game, players are trying to finish blue prints to get money into their vaults. The player with the highest points wins the game.

The solo version is as easy as a flip of the coin. No really. You have a coin, and flip it. One side the solo bot earns one coin and buys the cheapest upgrade if it can. If it can’t, give it 4 more coins and rotate the shop and add an improvement. The other side, the bot gets 5 coins and buys the most expensive upgrade. If it can’t, then it buys nothing. Rotate the shop, add a upgrade. That’s it. Upgrades the bot buys get stacked and count towards it’s points at the end of the game.

Gimmick wise, this game uses the box and the upgrades are puzzle pieces. When I say that this is a puzzle about piecing together a factory as best you can, it’s actually connecting the pieces together. I like engine builders, and I’m finding that conveyer belt games are ones that I feel bring that to the next level. The art is crisp and clean in this game. There’s even some jokes about the cleaning robots wanting to take over the world and rid it of human beings.