Hey folks, I’m back with Kickstarter News. I’m really excited about this project that’s currently on Kickstarter. It’s the perfect project for me to back.

Critical Core is currently on Kickstarter. It’s a RPG system aimed towards building social confidence and skills in younger kids that had a difficult time with it. Not to be confused by Critical Role Kickstarter, even though Matt Mercer sent out a tweet sharing Critical Core.

Critical Core has been in the works for seven years. It’s been the project of Game to Grow and looks at using games as therapy for kids on the autism spectrum.

Backing the Kickstarter will get you either the PDFs for the game. If you go to the next level for backing, then you’ll get a hard copy of the game. Included is the player’s handbook, facilitator’s handbook, and character sheets. The character sheets come blank or the game comes with some per-generated characters. Next, the game comes with a dry erase map, tokens, and cards to help with visualization. Lastly, it comes with 3 adventures, with more in the stretch goals. 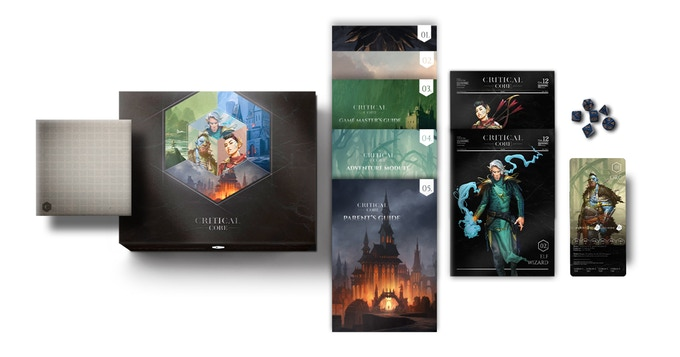 Each adventure module will have encounters in them that the players will have to face. Each encounter will target an area that is considered challenges associated to autism spectrum disorder. The game uses the FEDC (Functional & Emotional Developmental Capacities) to create these encounters.

The game is suited for cognitive ages 9+, teens and adults. It’s suggested 2-4 players with an adult running the game as the facilitator/game master. And the participants should have basic listing and verbalization skills. Currently the game has 6 playable classes.

So here are the reasons I’m excited for this system to come out.

1. Connection to my line of work.

I work in ABA, Applied Behavior Analysis. It’s early intervention therapy for kids with ASD. I’ve worked with kids from 2 years old all the way up to 18 years old. In ABA, I work with kids to increase language and communication skills, improve attention, focus, social skills, memory, and academics, and decrease problem behaviors. With a game like this, I can look at running a social group with multiple kids at once. We can work on a lot of the areas that we already work on, but it would be in a game form.

Not just in my line of work, but I feel overall that the world is going more and more digital. It’s easy to pick up your phone and play a game, connect online and play a video game with other people or even text instead of calling. How much of your communication right now is through texts rather than actual phone calls? I like the idea of actually sitting down and playing something at the table with other people. That’s what I love about board games. It gets people in the same room, experiencing the same events, and communicate throughout it.

3. I play Dungeon and Dragons.

I play Dungeon and Dragons, and have been playing for years. It was always off and on, but recently I found a new group of players and became the DM (Dungeon Master). I actually enjoy this just as much as playing the game itself. And when I say a new group of players, I mean new to the game. It’s great seeing a group of people come together and just have a great time. Most our sessions are lasting 6 hours. I think Critical Role (Not the same as Critical Core), has helped mainstream the game. If you haven’t seen Matt Mercer run a D&D session, it’s pure entertainment. Fair warning, there is strong language and adult situations in his games. *** Not in Critical Core. Critical Core is kid friendly.

This isn’t just geared towards kids with autism spectrum disorder. You can run this with any kids and it’s going to help build up confidence. My kids are 4 and 6, and a couple more years and I can see running this game with them. Maybe their friends. Hopefully their friends. I want to be that cool D&D dad.

Lastly, it’s not really a reason I’m excited for the game. This is because it was recently announced, after I backed it, that one of the stretch goals is an adventure module written by Jerry Holkins. If the name doesn’t sound familiar, maybe Tycho, Omin Dran, Acquisitions Inc., or Penny Arcade might sound familiar to video game and D&D fans. Penny Arcade is a web comic that was co-created by Jerry and his character on there is Tycho. Acquisitions Inc. is a D&D podcast that Jerry plays in. He plays Omin Dran. Once again, this podcast has strong language and adult content. *** Not in Critical Core. Critical Core is kid friendly.

So, just to recap. This is my first Kickstarter I’m backing. I couldn’t be happier to support a project with the goal of helping others. Take a look, I’ll include a link. Let me know what you think. Expect another blog post exploring the game once I get the physical copy.