Hey folks, back again. This time, instead of reviewing a game, I thought I’d talk a bit about my D&D antics. D&D, or Dungeons and Dragons, is a role playing game. RPG. It’s a tabletop game, meaning that you play it while sitting around a table all interacting in immersive story telling. I know, it sounds a bit geeky, but it’s a lot of fun. I’ve grown recently in how I play D&D. I started in high school, and it was just a bunch of one shots that never went anywhere. Paper and pencil character sheets, legos for maps, and one person getting the short straw and becoming the DM. DM stands for Dungeon Master. They don’t have a character in the game, but it’s their job to throw stuff and events at the characters while doing the story telling. I recently became the DM for a group of 7-8 people that haven’t played too much before. Not sure what I got myself into, I found I enjoy being the DM more now than I did in high school. I like more of the story telling than the just rushing in and bashing monsters on the head.

This is what I pack and a little bit of why I use what I do for the campaign.

First, a lot of stuff has changed since high school for D&D. Out are the Pencil and Paper character sheets. In are digital sheets that you can upload and view as the DM. My group uses DND Beyond. I got the DM account, paying a biannual fee to share all my content and players join my campaign. This made things a lot easier! First, all the character sheets have formulas to figure out all your skills, stats, damage output, and saves. This saves time trying to figure out everything during character creation. Next, as the DM and using DND Beyond, I can add items immediately when the characters find and identify them. Then, they can equip them and the formula takes that into account. There’s still rolling dice, but this makes it a lot easier to share and look at everyone’s character sheet.

Next, Discord app. It’s a texting based app, but I created a group just for my D&D Players. There’s a general chat for everyone to just discuss what’s going on in game. Even when we’re not playing and there’s down time in the game between sessions, I’ll let the players continue the story in that chat. It really speeds up going to shops in the game, looking for items, or even making items. Sometimes they go hunting for food while the party is camping or sometimes they just want to have a drinking contest. 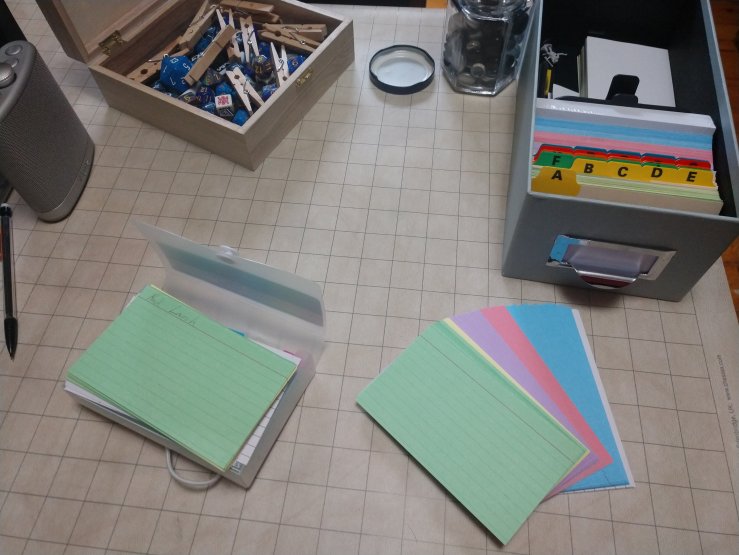 For getting ready for a session, I’ll get a plan of events, monsters, items, NPCS, and puzzles all ready to go. I do this by using a color coded system on note cards. I write down all monster stats on a quick card, NPC information or rumors they might have, even side quests on the NPC cards. Locations will have shop names, items, and people located there. Here’s a break down of my color coded system. White are monsters, Yellow are NPCs, Green are places, Purple are items, Blue are Puzzles, Red are traps. I like using a little note card holder while working on them and during the session. I then add it to the larger box for reference later or if the characters ever go back to a town. I’ve got all the NPCs and Locations already written down. I also have a little book that I can use as a quick reference if a player made friends with someone, joined a guild, or even made an enemy.

Another tip for this, when creating your own campaign it’s easiest to use an already flushed out map and lore. I’m using Faerun that’s already a well established D&D setting. I’m trying to use as much of the lore as possible, but I can change some things as well. This lets me have a wide source of lore ready for the players. It makes naming towns easy, even there are lists of locations in those towns. 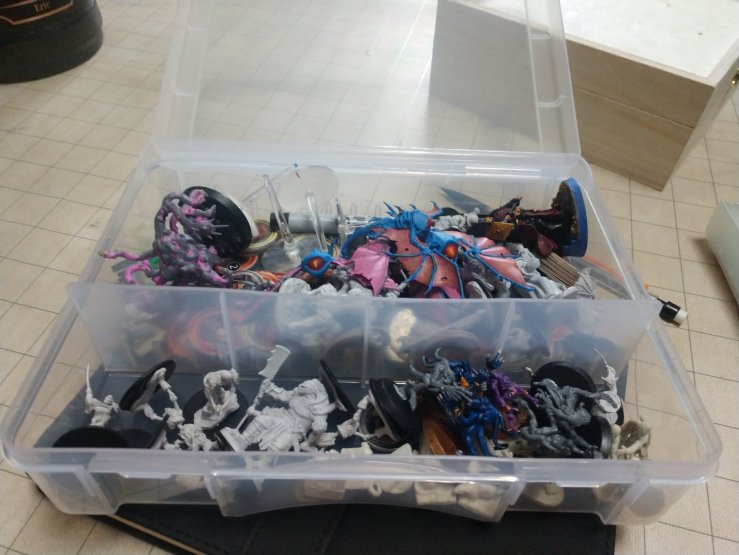 With the plan of events, I’ll figure out what miniatures I’ll need. My group is good with getting stuff that’s needed, splitting costs, or now 3D printing what’s needed. I also have some other game miniatures I’ve been using. I’ve used Zombies!!! zombies a ton. I used to be into Warhammer 40K and had a army that looks fantasy like. Miniatures add a lot to the game on a visual and strategic point. I’ll put the miniatures needed into a box for now. I want to be able to paint them all, but I haven’t had the time or motivation to quite yet. 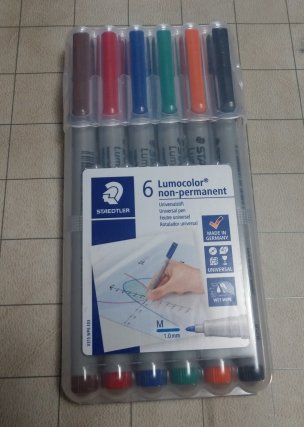 Now, I’ll make sure I’ve got my Battle Mat that I can draw the map out. I like using a “Not perfect” Chessex Reversible Battle Mat. The ‘Not Perfect” means it’s not cut the best, and is lower in price. It’s a square grid that is used with miniatures. It helps with the spacial and visual part of the game. In combat, it helps with how far a character can travel. In exploring, it helps map out the cave and how the characters move around. Now, I’m working on getting 3D printed furnishing for rooms, caves, dungeons, ect. For now, I’m using just printed out features and blocks to help create rooms that don’t feel so empty. I like using Wet Erase Markers on the mat. They seems to be the easiest to use. 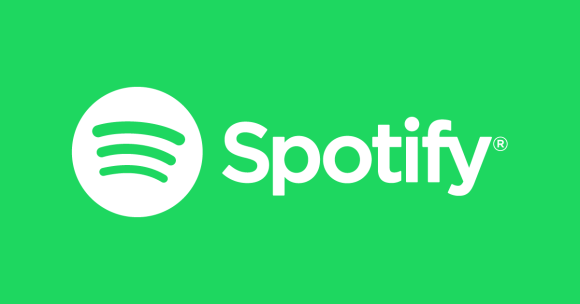 So, we’ve got the events, the miniatures, and the maps. Next, I like to have some background music for the game. I use a flask shaped Bluetooth speaker. When charged, this has lasted me 6+ hours. I like how it looks and the sound is good for gaming. I like to use Spotify, and I’ve recently made my own song lists to pick from. I like different battle music, exploring music, and even city music. Sure, there are ads, but it’s not too disruptive. 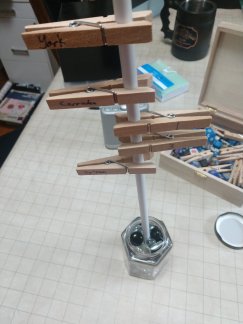 Speaking of battle music, for combats I’ve made an initiative tracker for the players and myself to reference. I used a glass jar filled with stones. When we’re in combat, I add a plastic rod to it, and use clothespins with the players names on it, and other ones numbered 1-10, to represent turn order. This is a good visual for players to see who’s coming up. The monsters are 1-10. I just used the wooden clothespins and a permanent marker to write the names on it. 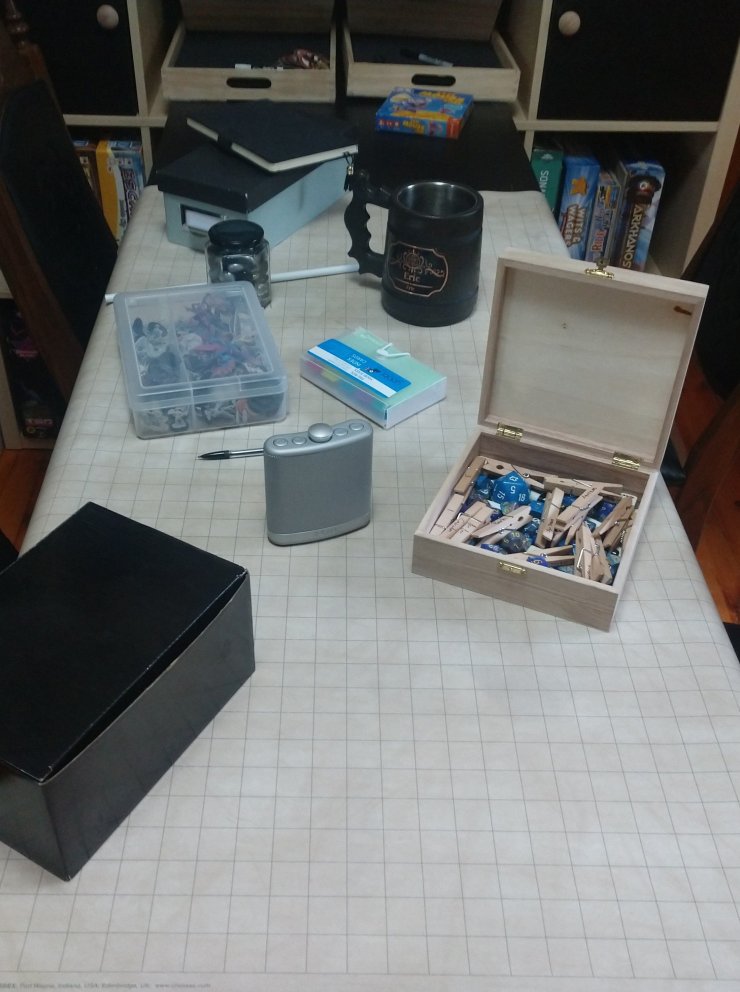 I pack all of this up in a box or bag and I’m ready to go. Sometimes all this prep and hard work gets foiled easily. Sometimes the players just choose not to go with the motion of events. Sometimes they decide to burn the whole city down after they saved it. . .

So, that’s how I usually get ready. I haven’t go into my campaign and antics yet, but expect more to come. We’re more of a casual group that likes a lot of humor. Let me know if you are running a game what sort of stuff you do to get ready.