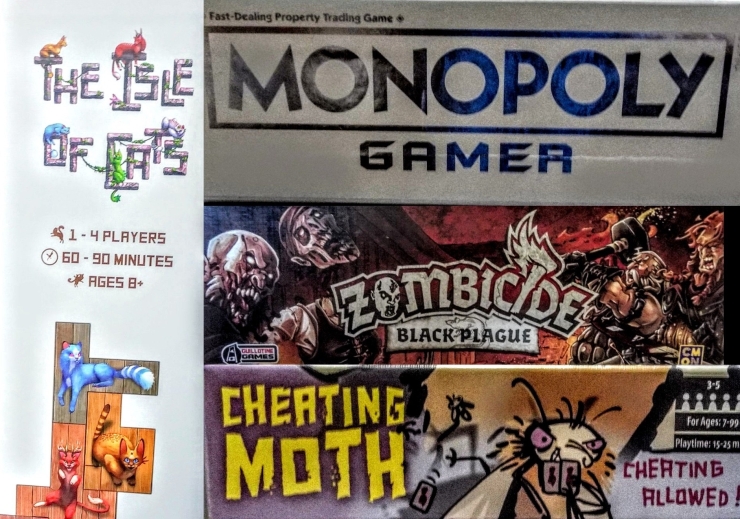 For day 29 I played the solo intro to Zombicide Black Plague. I’ve been wanting to play this game for a while. At first, I wasn’t sure on the number of models and characters in the game. I’m hooked now.

Zombicide Black Plague is a cooperative game that uses a modular board, miniatures, dice rolling, and action points. It’s one of those games from Kickstarter that has a plethora of added material. Most of these come in the form of added hero boxes. Zombicide Black Plague is my first venture into this genre of games by CMON. I’m more of a fan of fantasy that sci-fi or modern day apocalypse.

In this game, there are different missions you can try and beat. Look in the book, set up the tiles according to it, and place the appropriate tokens in the locations based on the mission specifics. 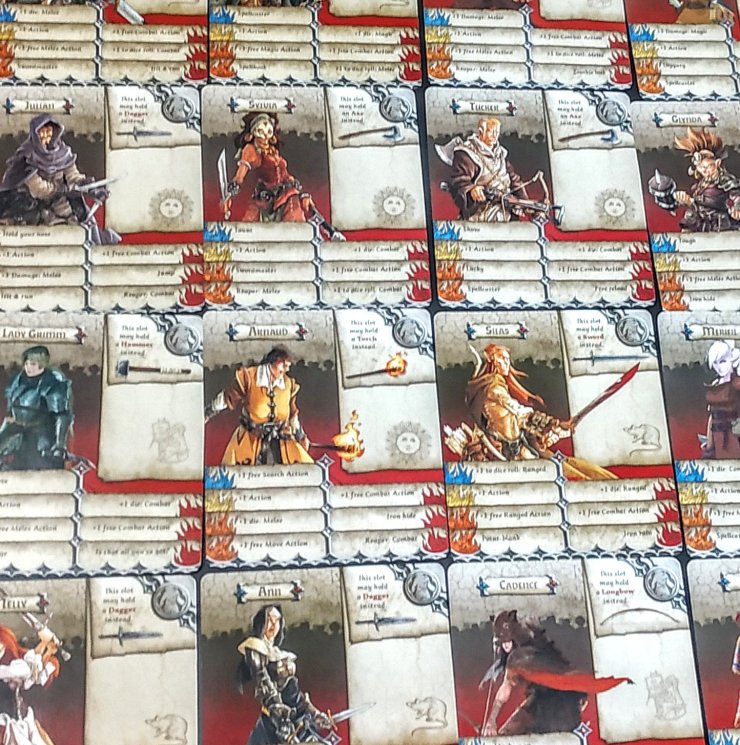 Then, each round the players will decide what order to resolve their characters. The characters take their actions choosing between movement, combat, searching, opening doors, and activating. Once all the characters have completed their actions, then it’s the zombie’s turn! Most zombies have 1 action they do and that’s move or attack. After the zombies on the board have acted, new zombies spawn from each spawn point. What’s cool about this is that when a character kills a zombie, they gain experience points, and eventually level up. When spawning zombies, you look at the highest level character to spawn zombies at that difficulty level. 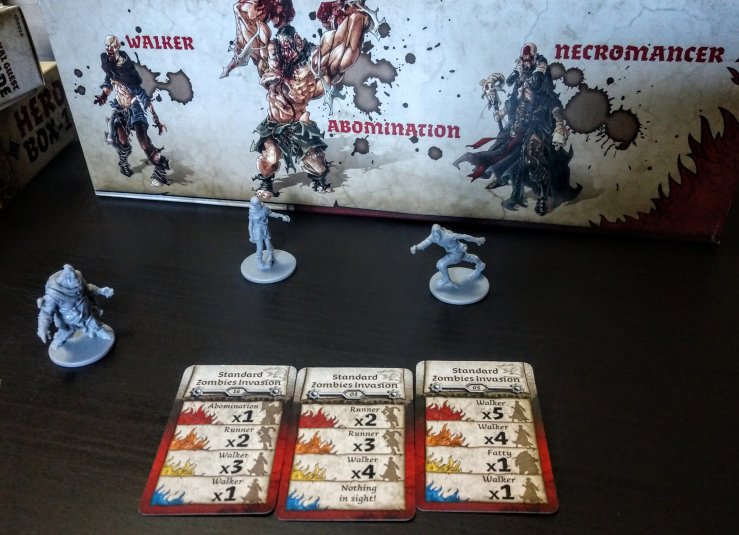 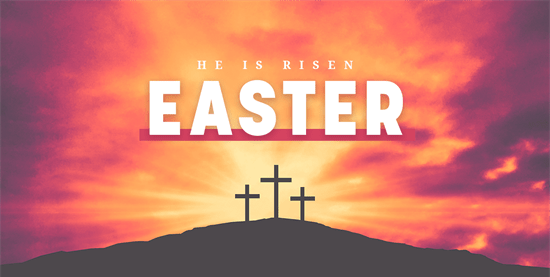 Easter Sunday, I spent the day with my family. We didn’t play games, but enjoyed the time spent together.

Today, I played a solo variant of Isle of Cats. This is a drafting game that uses polyonimo tiles that features cats. In the standard game, you’re using fish to pay for cards you want to keep in your hand. Then, when it’s time to rescue the cats from the island, you’re paying more fish to do so. 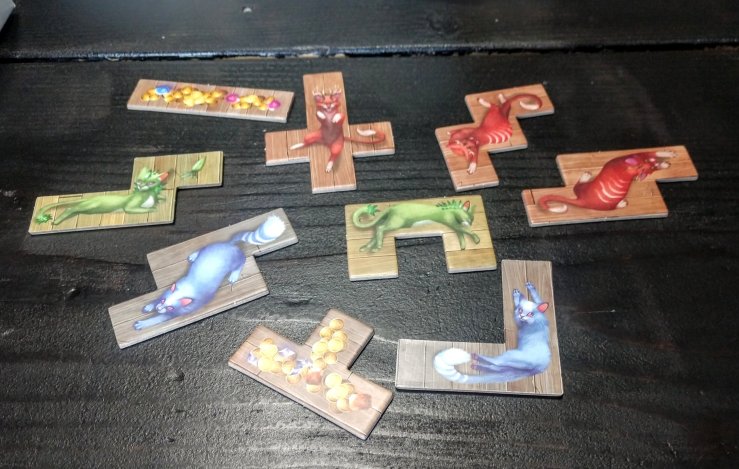 The solo variant has a deck of cards that you’re using as the dummy player. When you draw a solo card, it will tell you how many other cards to draw, and the speed of that dummy player. It goes first if it beats your speed. Each of it’s turns, refer to the solo card. Take the tile or tiles from the listed spots. Those are now gone.

In the game, you’re looking to fill up your ship and cover up rats, fill the rooms, match colored cats together to get the most points.

I liked that this game mixes drafting with the polyonimo placement. It’s a spatial puzzle you’re trying to solve. The solo variant is easy enough to follow and play. What’s cool about the game is that there are three other variants. The third one is the most recent, being a free variant given out during this social distancing time. It’s a remote play version that uses one person’s physical copy and streaming to others that have printed out score sheets. The other two variants are the standard variant and then there’s an easier family friendly variant.

Day 32 I played Monopoly. I know, there’s a lot of people that don’t like Monopoly. It can last long, it’s all about wheeling and dealing and luck. I’d agree. Monopoly isn’t my favorite game. But, when you’re son asks to play a game, you find one that interests him. Enter Mario. He’s familiar with the video game, so this one called out to him. He wanted to play it, not knowing anything about Monopoly. The Monopoly Gamer versions of the game, I don’t mind playing. There’s a built in end game timer, and it’s actually more fun than just rolling and buying properties. 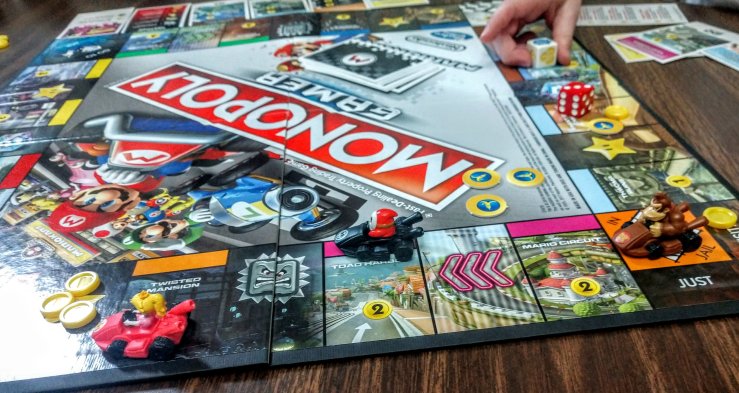 In the Monopoly Gamer versions, players roll one die for movement and one die as a special action. In Mario Kart, it includes throwing shells at players, dropping bananas on the board, and using that lightning bolt power up. So now, you’re making other players drop coins, moving and picking any up that you move over, and buying race tracks. Did I mention there’s racing? This one wasn’t my favorite part of the game. When a player crosses go a race is revealed. Each player can enter the race for a fee, and there are different prizes for each place holder. To win the race, you need to be the player with the highest roll on the die. So it’s luck based. It was interesting involving all the players that wanted to join in on the race, and it made it feel inclusive that any player can participate in it.

Uno was just introduced to my kids. They find it easy to follow and play. They really find it funny when they play a draw two on a parent. Game on, gauntlets off! We don’t keep score, but just play until one player wins then start a new game.

I didn’t get any conventional board games in today. I played the standard Hearthstone, but nothing beyond that. I think the trying a new game each day final caught up. If you haven’t tried it, it can get exhausting.

Day 33 I played Cheating Moth. The review can be found here. It’s a game that the whole family can enjoy. Nothing says quality family time better than cheating. I’m kidding. Sort of. This game encourages cheating, but in a way that’s expected and fun. 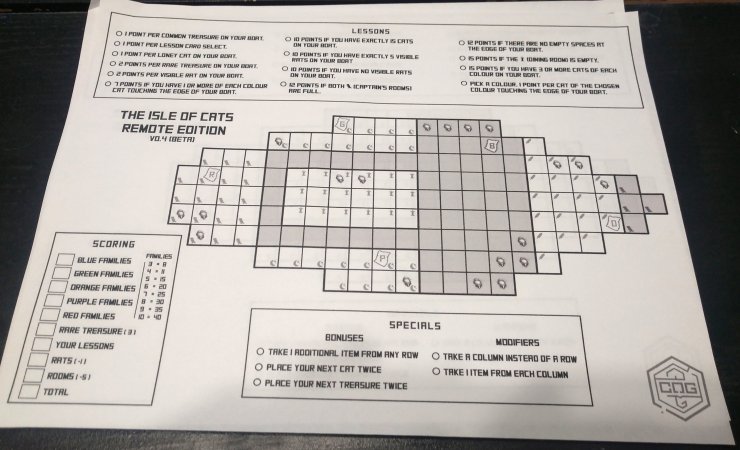 Ok, I played Isle of Cats already this week, but today I did a test run through the remote play variant. I set up how it would be. Angled my streaming device to see how it would look on the computer, and ran through a single play of the game. I wanted to see in there was any kinks I needed to get out.

This variant, everyone plays at the same time. There is a grid of tiles and cards that the player with the game is setting up. Each player selects a row to claim all the tiles and draws those in the ship score sheet. Sometimes there will be rare treasure cards in a row, sometimes the wild cat cards.

Overall, I’m excited to try this streaming. I enjoy the polyonimo games, and this one has the added benefit of cats.

What?? Another Isle of Cats game? This time it’s the family variant. In this simple version, a lot of the rules in the main game are stripped. Instead, each player gets 2 lesson cards to earn them extra points. You’ll draw 4 cat tiles, discarding the rare treasure tiles, for each player. Then in turn order, you select and place one cat. Play over 5 rounds, and score your boat. I played with my son, and he was blown away we had the same ideas for placing the cats! It’s a fun polyonimo game.