Hey folks! Back again with some of the interesting things I found on Kickstarter and online. Once again, I haven’t played any of these but they all looked interesting.

What’s interesting is that instead of working on personal words. Players are playing on a center play area. The starting player must pick a word that meets the rules criteria and play the starting letter for that word. The next player then has to continue with that word if they can. If they can’t continue it, they pick a new target word based on what was played already and continue the new target word. On a players turn, if they complete a word, the player that chose that word gets the letters used in the word as positive points. If a player can’t continue the word or come up with a new word using the existing letters, they take the current letters on the table and add them to their negative points pile. When a player names a target word, a player can challenge that word. Take a challenge card, look up the word in the dictionary. If it’s there, the challenger gets the challenge card and adds it to their negative points. If word is not there, the player who chose the target gets the challenge card and adds it to their negative points. A new target word is chosen.

This looks like an interesting variant on a word game. I’ve played games where you’re playing you own words, but not too often where the word is community and everyone is playing a letter at a time. I like the idea that you can change the word and claim the new one as your own if you’re not able to continue the current one.

The game also uses a mechanic that I enjoy. It involves the market, and the first art card is free. Anything beyond that requires you to add a token to the previous card in line to purchase it. When a player takes an art card, they also take all tokens on that card.

Link to the Kickstarter pager here.

This is a dungeon crawl game that uses an item deck and upgrading characters. There are two options to win the game. One player reaching 10 victories or all characters survive the dungeon. So this is a cooperative game with some competition. You’re fighting monsters, each other, or starting fights with other players. You’re trying to get the best loot or take it from other players. As players level up, the monsters get harder to fight as well.

This game has 9 days left to go. I’m not sure if it will hit the amount needed to fund. If they don’t hit the mark, I hope they look at options to relaunch. This one looks like a promising dungeon delver. 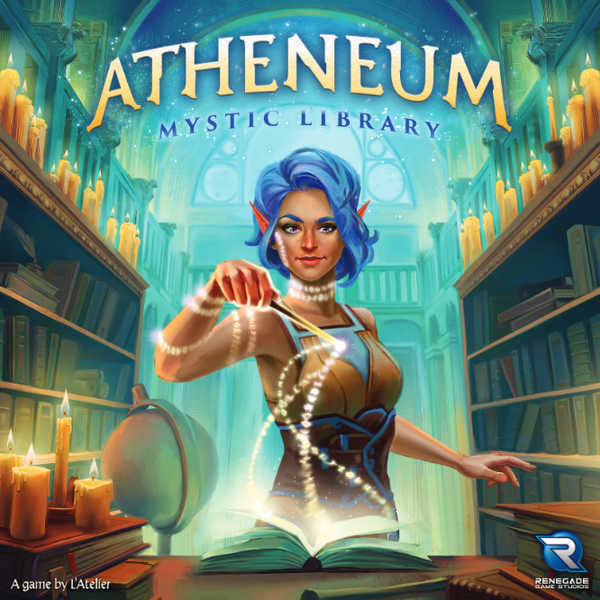 This one comes from Renegade Game Studio. They have announced a new game coming out called Atheneum: Mystic Library. This is coming out around September 2020.

Atheneum you’re playing as a student who is studying and cleaning up the library at the same time. You’ll earn points based on placing books in your shelf in the correct configuration. On BGG, this game has drafting and tile placement listed as being in the game. I haven’t seen any pictures of the components yet.

The game is designed by L’Atelier. This is the same design group being Obscurio and One Key. Both games have stunning art. I look forward to seeing more on this one soon.

Now, if you’re thinking that this game sounds familiar, you’re absolutely correct! Ex Libris is another library themed game from Renegade Game Studio. Ex Libris also has you creating a book collection and arranging them on shelves. Ex Libris is a worker placement game where each player has a unique power. Atheneum sounds to be a lighter version of Ex Libris right now. I’m sure they will be completely different in terms of playing, but as someone who enjoys a unique theme I look forward to this one.