Hey folks! Back again with some board game news! Once again, I haven’t played these yet unless otherwise stated. This is what I found this week and what looks interesting. This week we’re looking at adventuring parties, wolves, Wall St, Steampunk Racing, Dino Racing and Beasts and Bronze.

Clank! A Deck-Building Adventure is a game that came out in 2016. In the game, you’re using cards to move, fight, and buy more cards. You need to be quick and quiet. Every time you make a sound, CLANK! It might wake the dragon up. CLANK! Every artifact stolen enrages the dragon more and more!

Clank! Adventuring Party expands the game to 6 players. It adds unique character decks each player can start with. Here’s the list of characters you can be with this expansion.

I haven’t played Clank! before. Instead I have played Clank! In Space! I like the idea of specific player decks. This takes a deck builder and kicks it up a notch. In Clank! I like that you’re trying to not be as noisy, or the dragon will damage you. If I didn’t have Clank! In Space! This would have been the other direction I went due to the fantasy dungeon delve theme.

Clank! Adventuring Party is scheduled to come out September 2020.

Games by Bicycle is coming out with a couple of new strategy games. I previously reviewed a couple of their games and got my hands on their newest strategy games to review. Here’s a look at them before I do the reviews. 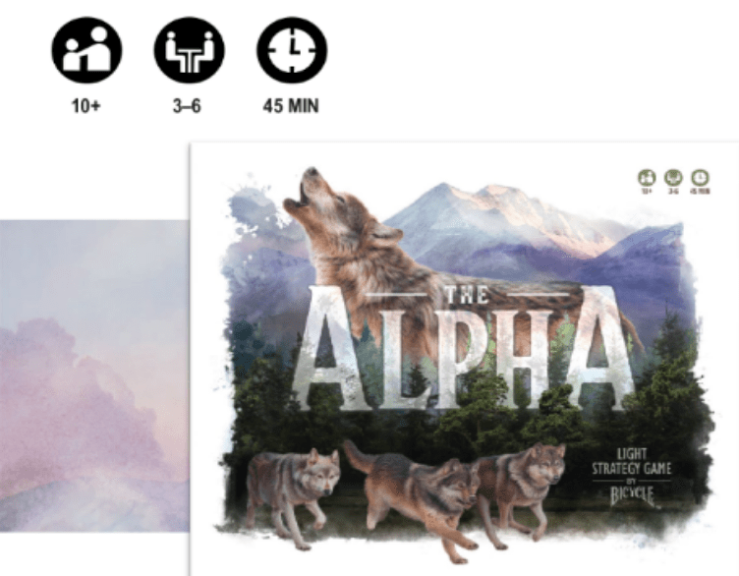 The Alpha is an area majority game with simultaneous selection when resolving conflicts. In it, 3-6 players play as packs of wolves hunting for food. Each region of food will only be given to the player with majority there. If there is a tie, then the dominate packs have a conflict. Each player can choose to share or fight. If everyone shares, then the food is split. If one picks fight, they come out on top and get the food. However, if too many pick fight, wolves will get injured and they lose out on food. The pack with the most food at the end of the game is the winner.

This one looks interesting due to the way the conflict for majority is resolved. You can either share it all, if one person is greedy they get it all, if all are greedy, no one gets it. It’s that trying to read the other people and hoping you chose correctly. Then the meeples. This game comes with wolf meeples. If it’s not dice I love, it’s custom shaped meeples.

Games by Bicycle is also coming out with a Wall Street themed game called Exchange. Exchange is a secret selection game about buying low and selling high. In it, 3-6 players are simultaneously selecting what they are doing in three phases. They’re picking what security to trade, how many shares to trade, and then each player is going to influence the market. This is all done while dealing with market forces that change it for better or worse. The player with the highest net worth at the end of the game is the winner.

Exchange also has each player using 1 of 12 founders to start the game. This changes what securities you start with and how much cash you have on hand to buy shares.

This one looks interesting due to the way the market changes. You think you’re doing great, and then something happens and those shares in banks just aren’t as good as they used to be. Now you’ve got to decided to sell them, cut your loss, and start buying another security or hold tight because the market is sure the rebound.

Steampunk Rally already came out in 2015. Steampunk Rally: Fusion is a stand alone game that can be combined with the first game. It’s currently on Kickstarter and has the option to purchase the game and the first game in a single box combo. It’s the perfect way to get into the game if it sounds interesting to you.

In Steampunk Rally, you play as an inventor that is building their racing machine while racing along the track. Players are drafting cards that will let them connect to their machine, gain dice, or vent used components of the machine so they can use it again.

If you’re too rough on the machine, it will lose parts.

This one looks interesting that it ties historical figures into a steampunk setting. Then you’re trying to build the perfect engine out of cards you’re drafting. Once you use part of your machine, you need to vent it to use it again. This stops someone from building the perfect machine and steamrolling the competition. Plus the translucent dice. Did I mention I love dice?

Rise of Tribes: Beasts and Bronze

Another expansion on Kickstarter!

Rise of Tribes is an area majority game with a modular board, dice rolling and placement that determines your actions for the round, and variable player powers. In the game, you play as a tribe that is growing in numbers, gathering resources, moving around the board, and building villages. The first player to earn 15 points is the winner.

Rise of Tribes: Beasts and Bronze add a new way to win the game by gathering bronze age technologies. It also adds new beasts and mechanics during the game.

The other thing this Kickstarter adds is a solo mode where you’re going up against a solo Warlord Tribe. This board flips over to add another tribe that players can use in a regular game.

This one looks good. I currently have Rise of Tribes on my shelf of opportunity so expect a review of the base game to come soon. I like that this one adds a solo variant to the game. I find that more and more games are being released with solo variants and that makes me more likely to back a project. I like playing solo games first, so I can get a sense of the flow of the game and the rules before trying to teach it to other players. If there is a solo mode, then that just makes it easier for me.

Earlier we looked at a drafting and dice racing game that had a steampunk theme. Now, we’re looking at a dexterity racing game with dinosaurs as the theme. And Dodos.

Dodos Riding Dinos is a 1-6 player racing game that uses simultaneous card selection to move and preform actions. Some of the actions include throwing bananas, calling a meteor to fall down from the sky, or flick dodo eggs at other players. If too many players select the more powerful cards, some of the actions won’t trigger. Is is safer to go slow and steady and insure those bananas, or go fast and hard and chance not egging an opponent? Also, miniatures. This game has lovely miniatures that shoe dodos riding dinos.

This one looks interesting due to mixing the racing theme with dexterity Mario Kart like actions. This one screams family friendly and one my son would be interested in playing. I can see him cackling now as he drops a meteor on mom. . .