Hey folks! I’m back with another review! This is a review copy from Bicycle Games. In this game, we’re taking notes from Duran Duran. Food sources have been scare, and all the packs are fighting over what food they can find. Yes, that’s correct. We’re hungry like the wolf! The Alpha is an area majority game with dice rolling and some simultaneous hidden selection added in. The pack with the most food at the end of 5 rounds is the winner! So, let’s get in touch with the ground. . .

The game is played over 5 rounds. Each round is made up of 5 phases.

Left Over Food – If food is not able to be split evenly. Starting with the player with the Alpha token, or player seated closest to the Alpha, each player takes one food at a time going clockwise.

Phase 5 – Advance and Clean Up

The game ends when the Weeks Left token reaches zero. The player with the most food is the winner. 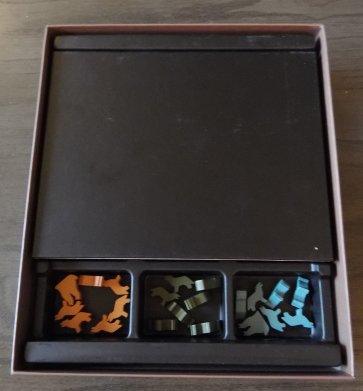 Next, I want to talk about the actual components. The region tiles and den boards are nice thickness. The region tiles have matching colored dice that are used in the game. Each region tile has what food is available when going there. It’s very nicely set up to remind players of the reward.

Next, the den boards have the conflict outcomes on them! One again, it’s easy to just have a small board, but to think about how to make this game as streamline as possible is a nice touch.

The dice are custom to the game. Each one is nicely colored and matches the region tile and is easily differentiated from the others. My one complaint with the dice is just a personal one. The die used for the elk has 9s on it. A couple of times when playing we mistakenly took it as a 6 without realizing it at first. Now we know what to watch for that when playing.

The game board is smart in the set up as well. The starting spot for the players is visually different and the areas where deep forest and near forest tiles go is labeled.

The wolf meeples are some of my favorite meeples. I like that they didn’t go with just what colors wolves might be, but visually different colored wolves. It makes it easier to tell them apart when on region tiles. You can easily tell the wolf meeple that counts as two apart from the rest of the pack.

Game play is a back and forth fight for majority on the food supply tiles all while deciding when to go with you alpha. You can place it first on a tile, to make a statement that you want this region and it’s going to be a tough fight. Then, you could wait until last to place it. Sneak a region away from an unsuspecting player.

Then the rolling for the food for each tile can have you on edge. Is the prey getting away, do you automatically get the food, or are you fighting for it with everyone there? Yeah, it’s random but that’s the fun of it. You can be at a region with one wolf and the other player with majority rolls for carrion. Guess what, you’re in the game for it now! I like that the bigger animals there are more chances for carrion and escape.

That brings us to the meat and potatoes of the game. Well, I guess since we’re wolves the meat of the game. The conflict phase. This is my favorite part of this game. It’s the part where you’re trying to figure out the other players and guess what they’re going to vote. You’re staring at each other, waiting for a tell. It’s great watching even if you’re not in conflict. First time someone steals the kill from the sharing players, it ups the tension during this phase. It’s also great when both players pick fight, lose out on everything, and then the scavenging player ends up with food! It’s clever player interaction that I haven’t experienced in a game before.

Overall, The Alpha is a quick game that has high player interaction. It’s easy to teach but hard to read people playing. It’s one that is welcomed to the table any time, and one I don’t think my kids will get tired of competing to get first player.

The Alpha will be available June 19th from Games by Bicycle.