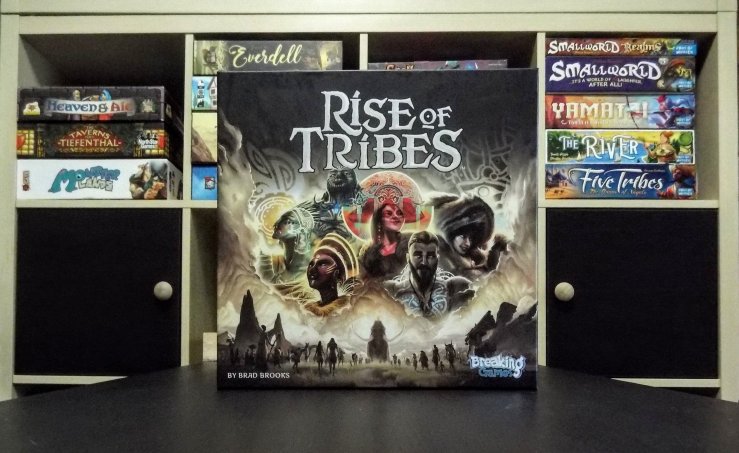 Hey folks! Back again with another review. This time we’re going way back. How far back? Back to the days of Sabre tooth Tigers and Woolly Mammoths. We’re trying to expand out tribes and build villages. We’re looking at Rise of Tribes. The first player to earn 15 points is the winner. So let’s don our best caveman outfit and see what we can do! 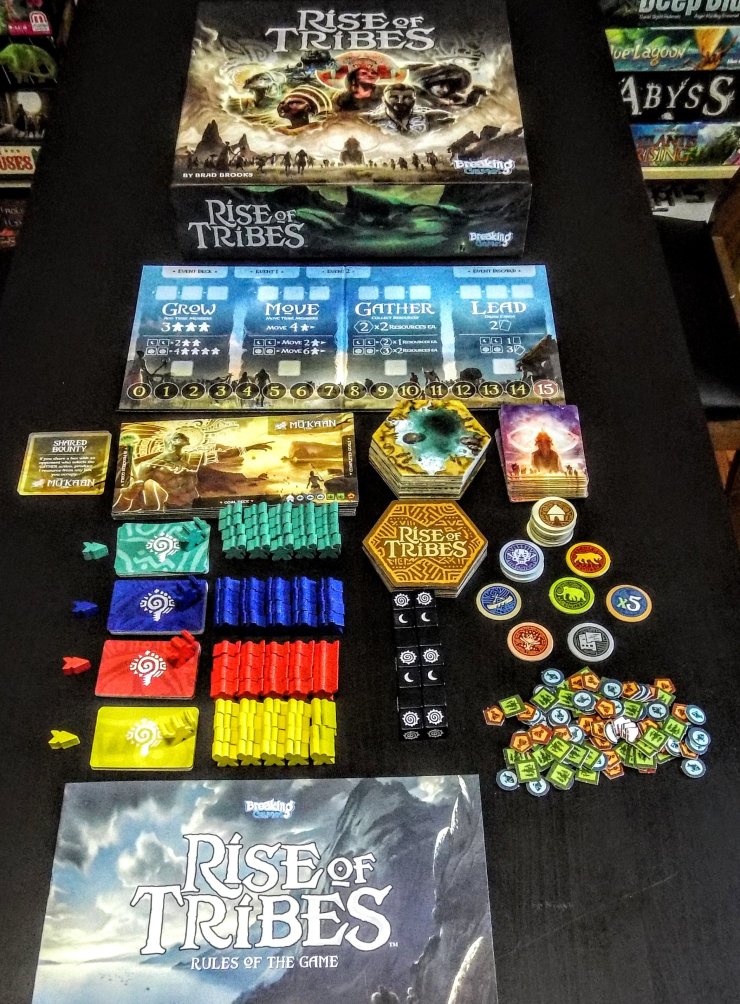 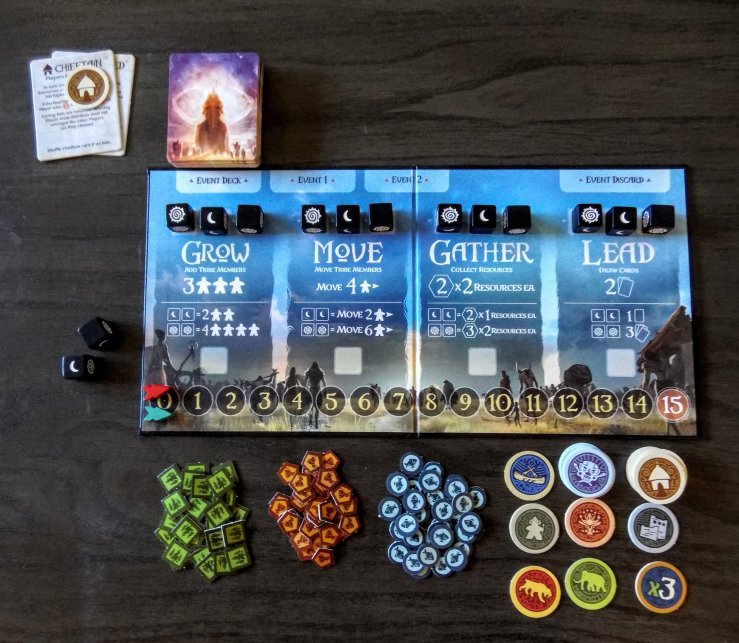 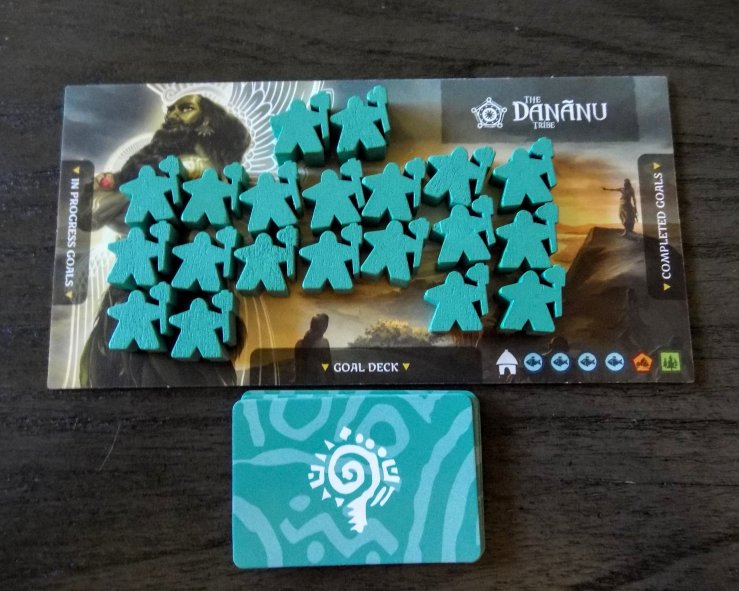 The game is played until one player scores 15 points. Each turn a player completes these 5 steps.

The beginning of each turn, players score 1 point per every village they have. 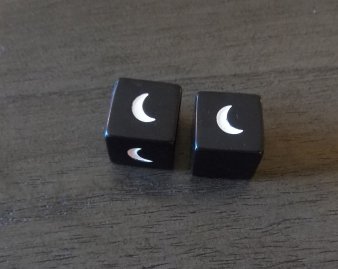 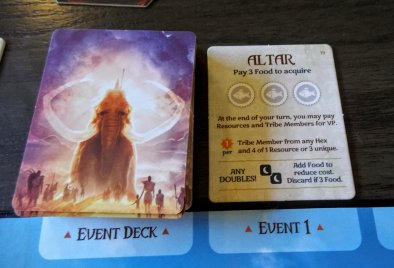 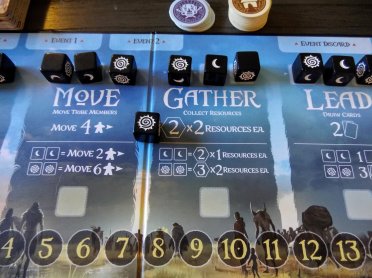 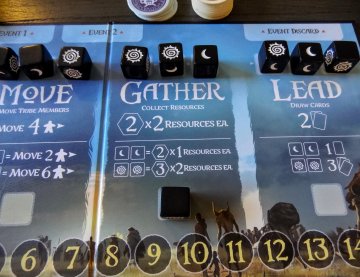 The active player takes two actions by picking one action for each die rolled. 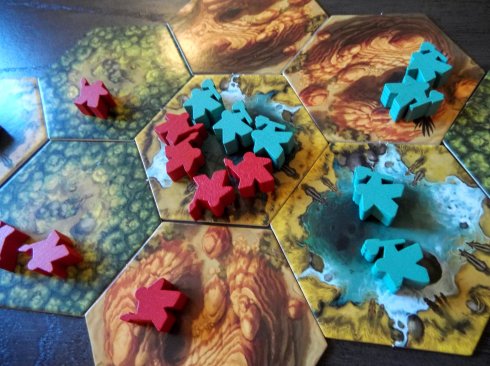 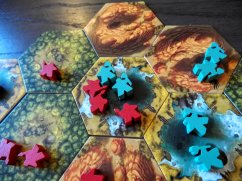 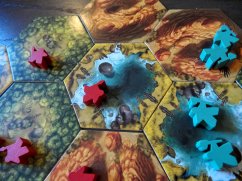 The population of each hex is 5 meeples. If there is every more than 5 meeples, conflict arises. 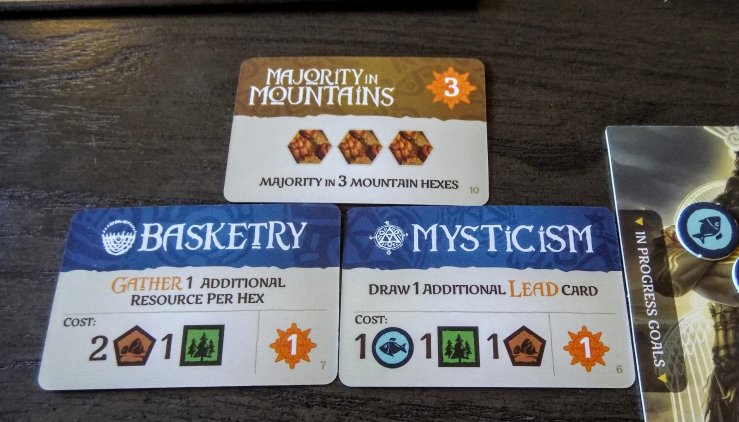 At the end of the turn, a player may build any number of villages by spending the resources indicated on their tribe board. Place the village token on a hex that has your tribe on and no other village token.

The game ends when a player reaches 15 points. They are the winner.

There is no player elimination in the game. If a player loses their last tribe meeple, the next turn they place two of their tribes on an unoccupied hex if able. 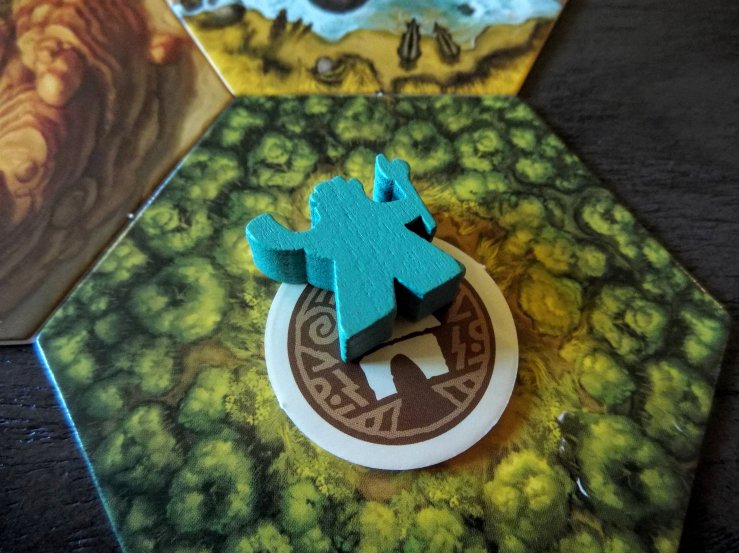 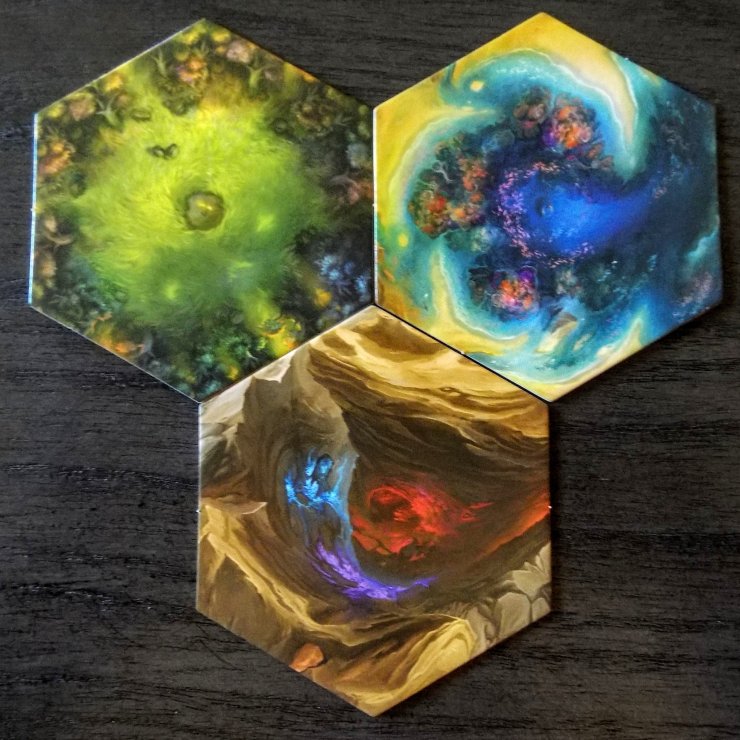 These produce an extra resource when using gather action.

This land counts as all types when gathering for a resource. You can gather any mix of resources. 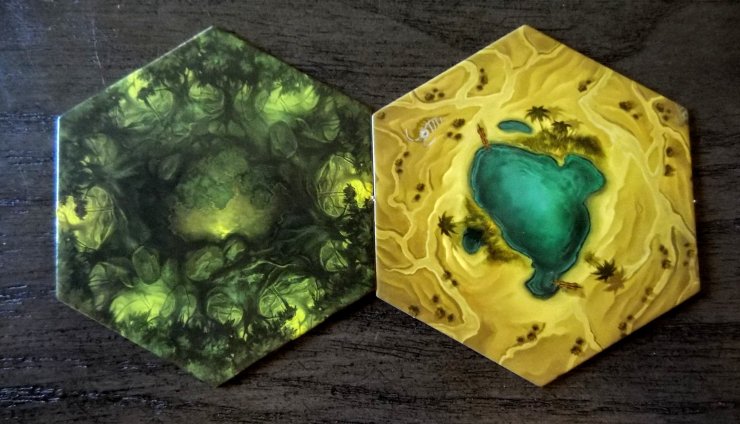 You need three tribe members here before you can gather resources. 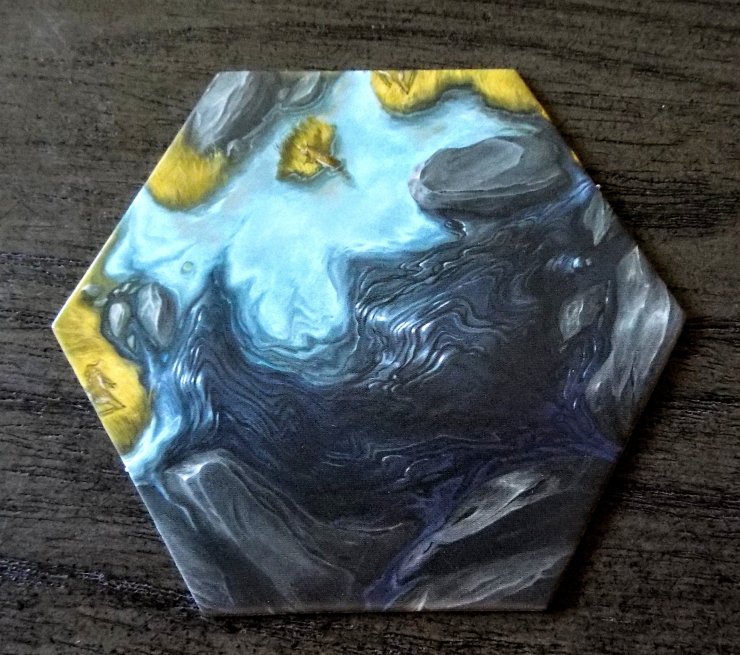 If there is ever only one member on this hex, it is lost to the tar after the conflict step. 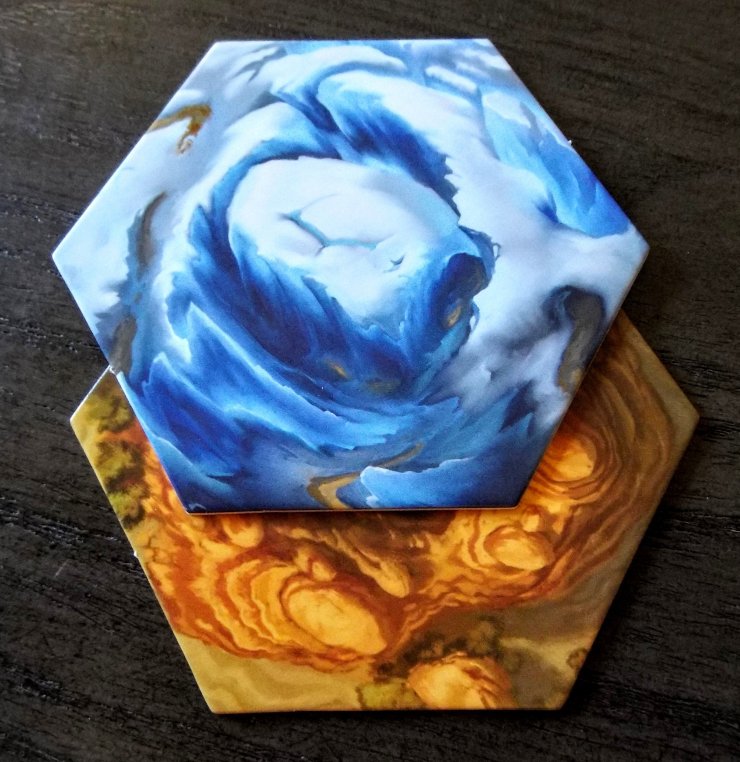 The starting player places the glacier over top of a mount tile.

There is a limit of 3 meeples and no villages on the glacier. In addition to that, there can ever only be a max of one resource gathered from here a turn.

When a player takes a double sun action, place a stone on the glacier. When the glacier receives the 5th stone, the glacier melts and it acts like a normal mountain. In addition to that, the next player to gather here receive those 5 stones. 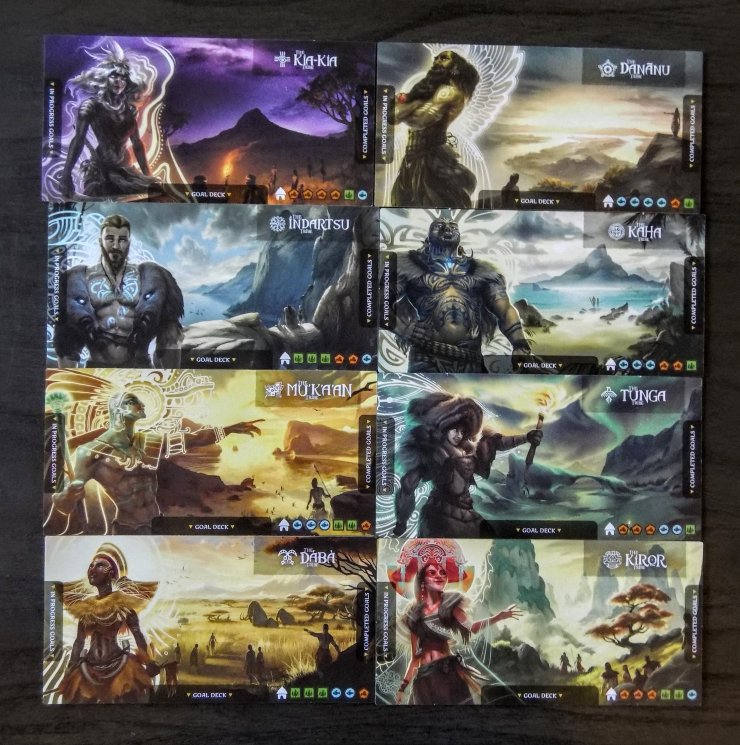 Once you’ve played the game enough times to get familiar with it, when you pick a tribe board flip it over. Take the corresponding tribe name card and pick one of the two unique powers to use for the game. 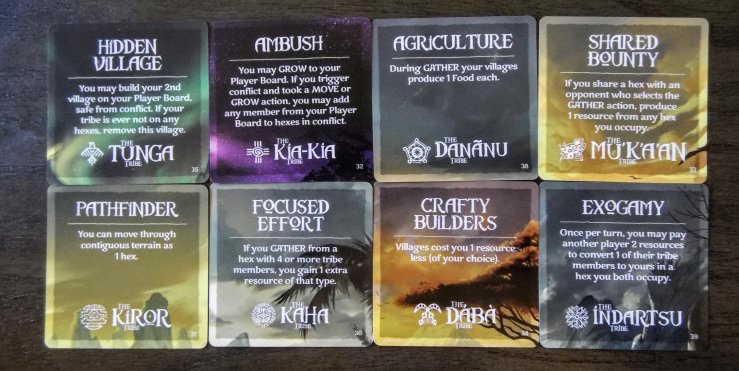 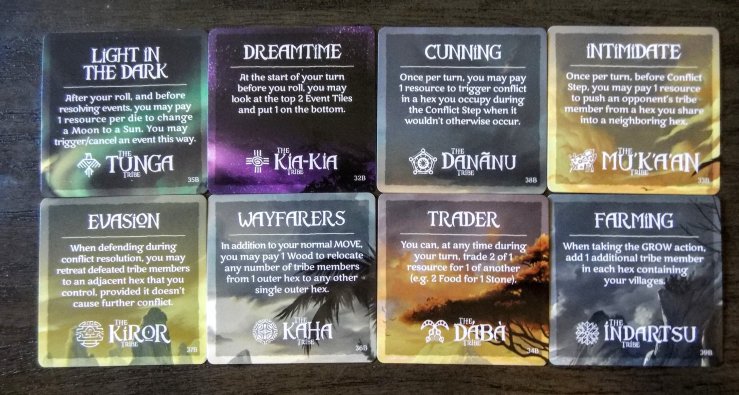 Let’s talk about the components. The game I have is the retail version of the game.  The player tribe boards are nice thick cardboard. The goal cards are nice and easy to read.  The meeples are fantastic!  I like that each player gets a different looking meeple. The one thing I thought was a little weird was the yellow meeple. I mean, you’re hanging out with three other tribes. One with a spear, one with a hammer or club, and one with a bow.  Yellow meeple chooses a vase? Maybe it’s filled with bees for when they conflict with the other tribes. The resources are a bit small for my liking.  The villages and other tokens are a good size. The dice are nice custom dice, and the symbols are easy to read. 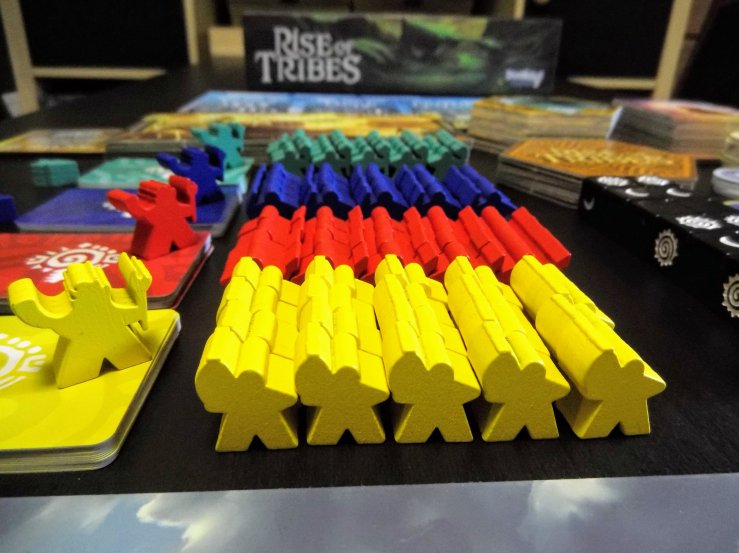 Now, there is a bonus if you really like this game and want to upgrade it.  Breaking Games makes a deluxe version of the game and a upgrade kit if you have the retail version. It includes wooden bits for the resources, saber-tooth, and mammoth. So those little resources that I’m not too fond of are now chunky bits.  Now, it’s a $25 upgrade so it will really depend on your comfort level of spending extra on a game to only change the components.  If you enjoy this game, I can see this as a good option. 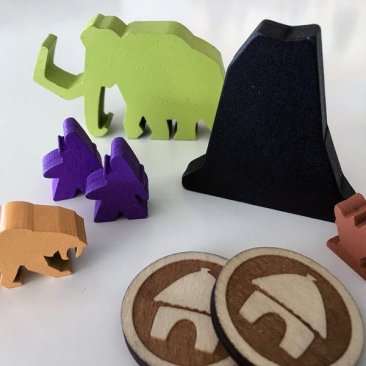 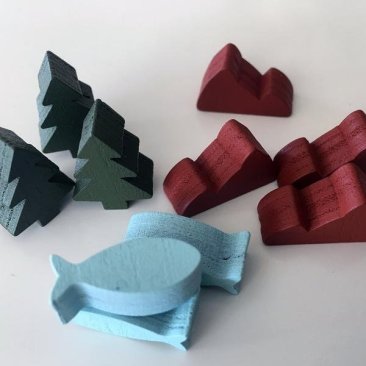 Game play wise, I like that the layout of the map changes from game to game and from player count to player count. It adds some replay ability to the game. Then I how players choose their actions. I like that the dice rolling, and the randomness of it, can be mitigated by your options of where to place them.  Then the dice you’re rolling is as important as the dice that’s on the board. I like that you’re sliding the dice over for taking an action, then the last die in the line is moved down and used for the next players roll.

The events that happen through the game is a nice touch. It breaks up the game play just a bit, and forces players to adapt their strategies. Some of the events are good and can score you bonus points. Some aren’t so good, and can change parts of the game until they are removed. 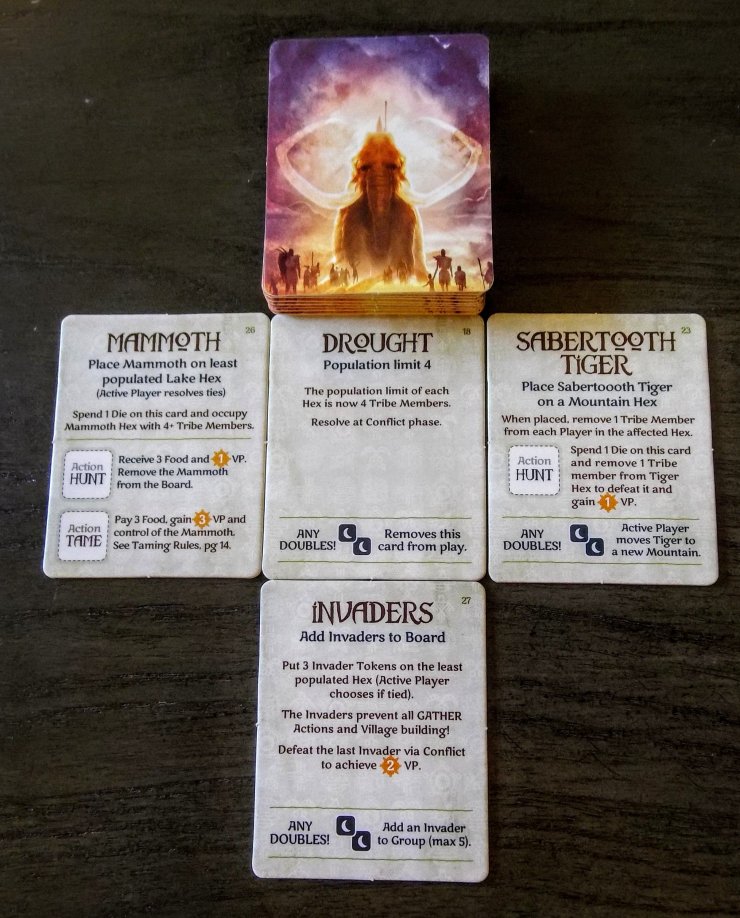 I like that this game is about managing resources and has area majority.  It really feels like you’re expanding your tribe and discovering new things by growing your tribe in size, moving around the board, gathering resources, and fighting other tribes for their land. Then building and defending villages or building your goal cards.

Lastly, I like that there is a clear cut way to win. It’s the first player to 15 points.  No extra turns and not the player with the highest points. It’s the player to first reach 15 points. So not only are you trying to build a good gathering tribe, you’re also racing to 15 points first. That’s where conflict comes in nicely. If another player has a village and is getting those extra points at the start of your turn, you want nothing more than to stop that. Move your tribe to that area, then grow them there. Just make sure you have equal or more tribe members, and their point making village is as good as gone. 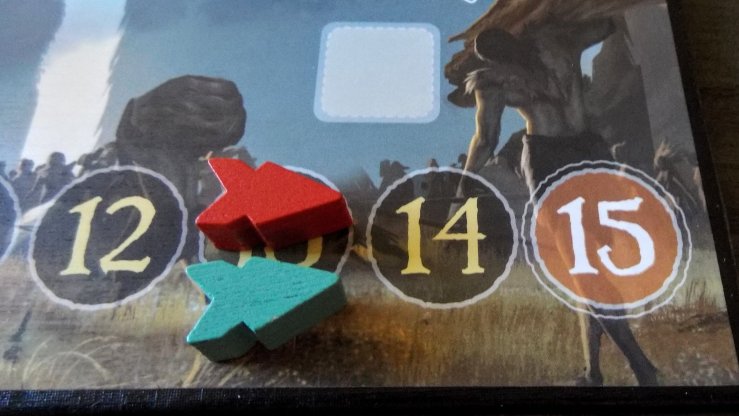 Rise of Tribes is a beautiful and easy to play game. It’s fast to teach, fast to play, and doesn’t out stay it’s welcome on the table.  In addition to being a good candidate for a gateway game, there are other things you can add to the game to make it feel a bit more advanced. This includes the special tiles, elders, and variable player powers.  While it’s not going to change this from a gateway game to heavy Euro game, it will add enough intrigue to keep the advanced gamer contempt with playing a lighter game.