Hey folks, I’m back today with a friend. Today, we’re going to look at Zombie Dice. It’s a press your luck dice game. It’s for 2+ players and takes about 20-30 minutes to play. The idea of the game is you’re a zombie and you’re trying to get the most brains. Zed, have anything to add? “Graagh.” Well said Zed.

Zombie dice comes with the rules, 13 dice, and a cup to store them in. That’s it. I also bought some plastic brains that players can take when they score the brains. It adds just a little bit more to the theme. The dice have three different outcomes when rolling them. Brains, which are good. Footprints which aren’t so bad. And blasts, which hurt. The dice come in different colors which indicate how many sides are blasts. Green dice have a single blast. Yellow dice have two blasts. Red dice have three blasts. I like to think of it as a stop light. Green means go, yellow means slow, and red means stop. Zed, have anything else? “Grrrh.” Once again, well said Zed. Couldn’t have said it better.

Alright, for those that don’t speak zombinese, here are the rules. Place all the dice in the cup the game comes with. Without looking at the dice, grab three of them from the cup. Roll the dice, and resolve what you rolled. Brains and blasts are kept. Footprints represent the victim got away, you’ll have to keep that die to roll with your next batch if you decide to keep going. If you get three blasts, you lose all your brains collected this round. Once all the dice are resolved, you then decide if you want to keep going or stop your rampage. If you keep going, you’ll need three more dice.  If you have any footprints set aside from the last roll, grab them. Then grab dice from the cup until you reach three. Repeat this process until you either decided to stop or get three blasts. If you decide to stop, you gain how many brains you rolled that round. 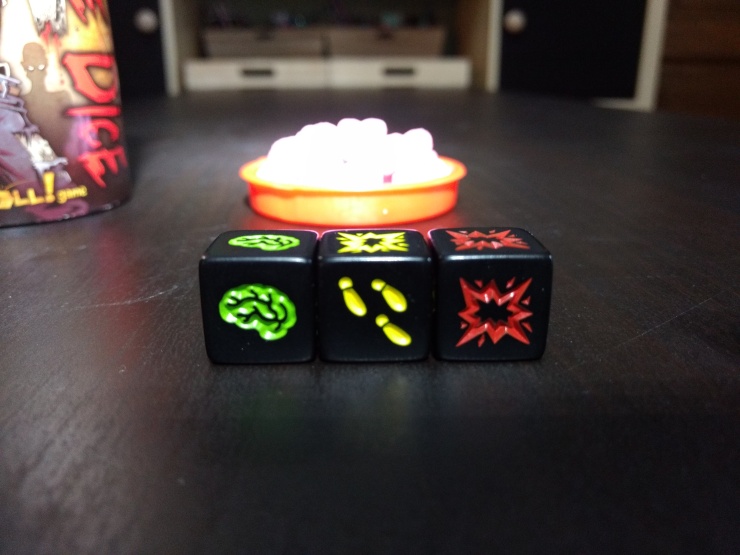 So, what do I think about the game? It’s a great filler game. It’s a press your luck dice game. Those are some of my favorite games out there. The components are really nice. The cup is plastic, so I don’t need to worry about it wearing down over the use. While being a zombie game, the only “scary” thing is the art on the dice cup.  My three and five year old commented on it, but that was it.  They still liked collecting brains and rolling the dice. I played this with my grandma, and she had a blast with it. Sometimes three. Rules and game play were easy to explain. Plus, when else can you say “Grandma, you don’t have any brains.” and not get smacked. I really like “encouraging” other players to keep going. While this is just a dice rolling game, there was a lot of interaction while playing it. I recommend this to anyone that is looking for a light filler game.