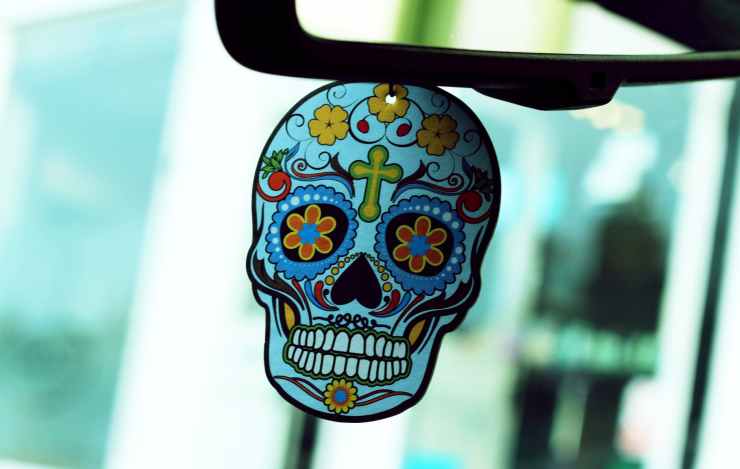 Hey folks, I’m back again. I’m trying to keep my goal of two posts a week. So tonight, we’re going to look at a game formerly known as Skull and Roses. No, not that Grateful Dead album that features a skeleton with rose hair. It is believed to be a game rediscovered in a biker bar. Now called Skull, it’s a bluffing coaster game for 3-6 players published by Asmodee. Now, you aren’t misreading. I said coaster. That’s because this game uses coaster cards instead of the traditional rectangular shaped cards. I found that intriguing when I first looked at the game.

The game comes with the rules, 6 player mats, and 24 player coasters. Each player mat has 4 matching coasters that make up what a player will have for the game. Each set of coasters will consist of one skull and three flowers. All the player sets are different colors and different art. Not a lot of components for this game, but let’s see if that will impact game play.

The goal of the game is to complete two challenges successfully. What’s a challenge? It’s a bet that you can uncover the wagered amount of cards without hitting a skull. For the first round, everyone must play a face down coaster on the lighter side of their mat. After your first round, you can either play another coaster or issue a wager. If you play a coaster, then it’s the next players turn. If you issue a wager, then you state a number of coasters you can flip without hitting a skull. Going clockwise, the next player must either pass or increase the bid. This goes on until all but one player passes. The winning bid gets to play the challenge.

Starting with their own coasters, the player flips over a number equal to the bid. So, don’t win the bid if you played a skull in your own pile. After all your coasters are flipped over, you move on to the opponents piles until your bid number is hit. You can move from opponent to opponent when flipping over their coasters. It doesn’t need to be all their pile before moving on to the next. If the challenge is a success, and there are no skulls flipped, you turn your player mat to the darker side. If it’s already on the darker side, you win the game. What happens if you lose a challenge? You lose a life, or in game terms a coaster. Shuffle all your coasters together, and a player randomly chooses one. Don’t show anyone this coaster, as it could be your skull. If you’re all flowers, everyone will use your pile to flip over since there’s not chance to reveal a skull. If you can’t play a coaster, you must issue a challenge. Once you have no coasters, you’re out of the game. A little bit of a player elimination aspect, but someone usually wins to challenges before a player loses all coasters. 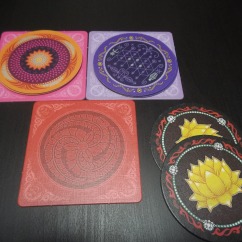 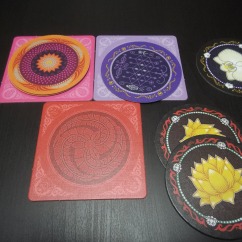 Here, I win the challenge.

Here, I lose the challenge.

So that’s the game. It’s a game where you’re either playing all flowers and trying to win challenges, or playing a skull and trying to foil others. It seems simple, but it’s a challenge trying to balance the two. You could play all flowers, think you’re winning the bid, but then the number gets too high. You know your pile, but what about everyone else?

Player mats after wining a challenge.

This is a fun bluffing game. It’s simple and the art is beautiful. Each player set is a different tribe with a different flower. I think my favorite is either the Mexican Day of the Dead skull and roses or the Japanese Samurai skull with lotus flower. The bluffing part is fun, and even the issuing a wager. I liked calling a wager when I played a skull myself. When I initiated the challenge, it says “Hey, no skulls here.” So if someone out bids you, can they trust your pile is safe? Another part I liked is when you’ve got to decide if you play a skull right off the bat or wait until a round or two goes by to make it closer to the top. There’s some strategy to this bluffing game. The games I’ve played were a blast. One game, a player tried to bluff a challenge, but fail due to everyone playing a skull the first coaster. So hen they bid one, they didn’t expect no one else to out bid them. My grandma played this one. It took a little while for her to get the hang of challenges, but she was a good bluffer towards the end. If you’re looking for a bluffing game that’s different from poker, I’d suggest this one. It’s a small box and easy to transport. It’s quick to teach, fun to play, and nice to look at.