Hey folks! I’ve gotten myself in a pickle. See, I went exploring in a temple, found some treasure, got cursed, and now I need to find my way out of this cursed temple. I’ve deciphered some of the hieroglyphs on the walls, and it looks like I have 10 minutes to escape. The pretty pictures also tell me I need to put most of the gems back to open the door. I really should have made a map of this place. Well, at least I have my fedora and trusty whip. Que the Indiana Jones theme, I got this.

Escape comes with 25 gemstones, 25 custom dice, 14 curse cards, 13 treasure cards, 13 basic tiles, 13 curse and treasure tiles, 6 main chamber tiles, 5 wooden player meeples, 5 player tokens, 1 gem depot tile, 1 sand timer, and 1 soundtrack CD. Yes, you heard that correct. This game comes with a CD! Talk about finding treasure! CD, for those younger readers, stands for compact disc. It’s an ancient technology that required a CD player to play the tracks on it. Don’t have a CD player? You have two options. First, you can go to the closest thrift store and pick up the best looking CD player, or you can just look up an Escape the Cursed Temple app or digital file to play over Bluetooth speakers. I opted for the second one even though I have a CD player.

The game comes with a couple of modules. I suggest the non-curse and non-treasure tiles to start. So the players get a hang of what need to be done. Then you can unleash a newer threat to the game besides not escaping.

To set up the game without the treasure and curses, just take those tiles out and set them aside. These tiles have either a totem or a small square on them. Next, each player will pick a color and take that meeple and same color player token. Next, each player gets five dice.

Find the starting and ending tiles and take them out of the stack of tiles. Shuffle the room tiles and draw two rooms. Place the starting tile in the center and one of the two rooms on each side of it. Draw 4 room tiles and shuffle in the escape tile, then place these rooms on the bottom of the room stack. The stack should be face down and have the “Escape” logo on the top. Now you’re ready to ESCAPE!

Let’s look at the dice and actions you can do on your turn.

The dice has 6 different icons on them. 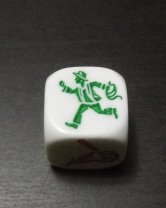 The actions you can do are enter a chamber, discover a new room, activate magic gems (get rid of them), escape, or provoke a turn of fate.

To beat this game, all adventurers need to escape. Sounds easy? Well, there are three spots on the soundtrack that you hear a gong. The first two times, you need to haul pack back to the starting tile. You’ve got 30 seconds to do so. If you don’t make it before the slamming door sound, you lose one die for the rest of the game. The last time you hear the gong, might be your last. Well, it is the last, but you know what I mean. This signifies that you have 30 seconds to escape the temple or lose the game.

Once ready, play that sound track. When you hear ESCAPE all players start rolling their dice simultaneously. Play continues until the end of the soundtrack. Do you have what it takes to escape? Did you escape and want more of a challenge? Let’s look at the added module. 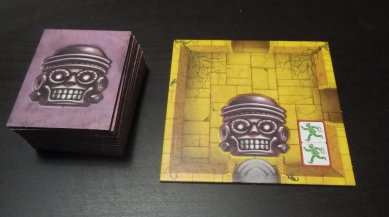 The second module adds cursed rooms and treasure rooms. Simply just use the 13 curse and treasure rooms instead of the basic ones from the game. Follow the same set up as the base game and you’re ready to go! There are just some special rules for these rooms when they are revealed.

Cursed Rooms – When discovered from the stack of rooms, the player to discover the room draws a curse from the shuffled stack. These will limit game play for that player, and has 3 icons on the bottom. These are what you need to roll to remove this curse.

You’re ready to go and try to escape all over again! Feel like there’s too many rooms with curses and treasures? Experiment with a mixture of base rooms, cursed rooms, and treasure rooms. This game is highly customization with what rooms you have in your temple. Want an easier run? Have less rooms or less gems. Want en even more challenging room? Add more rooms or more gems.

I keep describing this game as Legends of the Hidden Temple meets tile laying and dice rolling. This is a quick game, but it’s far from easy. It’s fairly simple to teach. Set up isn’t too bad. Art isn’t anything spectacular, but it works for the game. Each room looks like it’s a room of some ancient temple. What really shines is the game play. This is such a chaotically fun game. Everyone is rolling at the same time and shouting out directions. I can’t stress this enough. Have a temple buddy. Running in groups helps when you’re locked out with black masks. It’s such a great moment when someone is locked up and you’re there to save the day. It’s also such a great moment when the gong hits, and you’ve got 30 seconds to get back to the start tile. Then you start getting locked out. It’s okay, your temple buddy is right there by your side. Then, you sit there as your temple buddy needs to make a decision. Help you out, or make a run for the door and not lose a die. Well, you just saved them so you know what they’ll decide. And then, you sit there as they roll their dice, and get farther away from you. I love the player interactions in this game because of that. This is a good kind of stressful. It’s no downtime, rolling what you need, but still having challenges along the way. I also like you can add and change up the rooms in a game to make it either more challenging or easier. When teaching, I always start easier so players can grasp the game. Then, I start adding in the other modules. I like the goofiness that curses add and the temptation that treasure adds. Do I try to get this treasure, but then that could waste some time. If you’re looking for a fast, cooperative game I highly suggest this game. If you don’t care for real time games, then I’d skip this one. It’s chaotic, fun, and fast. Last game night this was the first game I played, and we played it several times in a row. Before moving on to the next game, one of the players new to the game informed me it was in their online shopping cart ready to go. That’s always a great moment when you share a game with someone, and then they want to share it with others. One of the reasons for doing this blog is so I can share the games I enjoy with others.

*A Queenie is a small promo that Queen Games puts out for games. 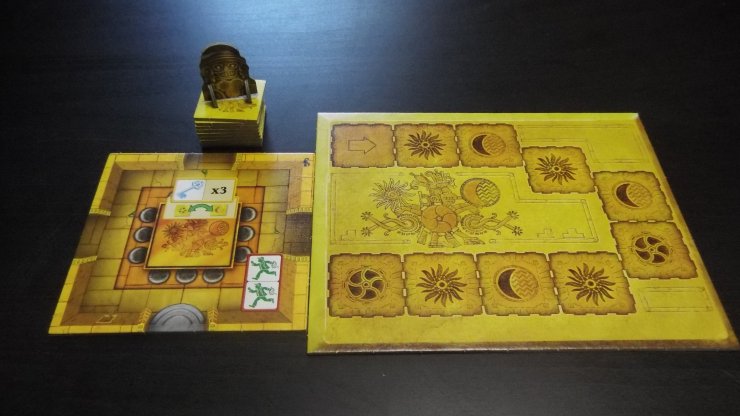 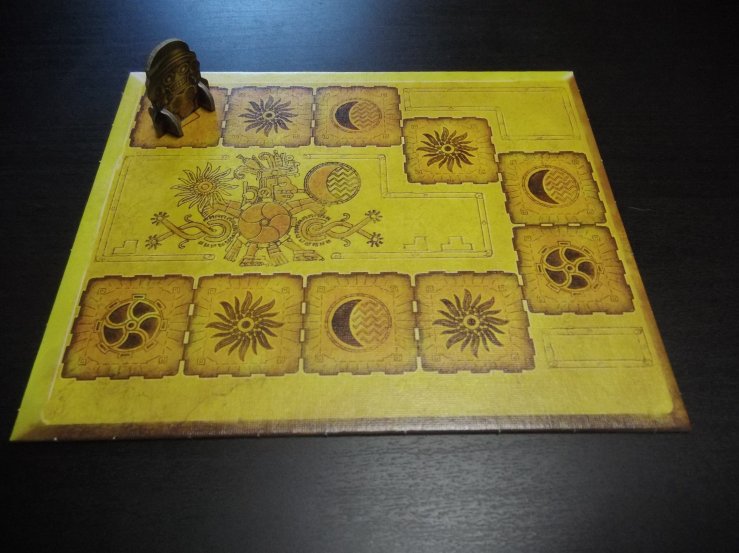 Every time a player discovers a gem room, draw the top calendar and place it face up on the discovered gem room. The calendar tiles show one of three icons. A Sun, Moon, or Gear. Players can only activate gems that match icons in front of the Maya figure on the board. When a player activates a gem matching the icon, move the Maya figure up one space. The Calendar room can be activated by 3 blue keys. Once activated, you can swap two calendar tiles in rooms with each others. Ignore the calendar if the Maya figure has advanced all the way to the end.

Every time a player discovers a gem room, draw the top calendar tile and place it face up on the discovered gem room. The calendar tiles show one of three icons. A Sun, Moon, or Gear. If it’s the same symbol as the pace in front of the Maya figure, advance the figure. If it doesn’t match the Maya doesn’t advance. Both cases, place the calendar tile on the bottom of the stack.

There are three bars on the calendar board. These are countdowns. When the gong goes off, there are consequences for being in front of these bars on the board. The first two bars will result in you losing a die to the calendar room. Being in front of the third bar will result in additional keys needed to escape. The extra keys needed starts at 3, and gets lessened as you get closer to the bar. If you pass the bar, then you don’t need to roll any extra keys. The calendar room can be activated by three blue keys. Once activated, you can swap two calendar tiles in chambers with each other. The other thing you can do is retrieve your die placed in this chamber from the other two bars when entering this room. You can only retrieve one die per entering the room.

I like that this promo adds a new difficulty to the game. Either one has it’s challenges. It amps up planning and thinking out when to activate gems. The doomed board seems especially difficult taking your dice away and making you roll extra keys at the end. The eternal board adds the difficulty of only being able to activate gems when the room has a matching tile. I like that both the boards can be mitigated with the calendar room. This is a nice addition to the game. I recommend this if you’re looking for something a little harder.

Set Up – After placing the two starting rooms, shuffle totem chamber into the room stack.

Game Play – Once discovered, plays can try to activate up to two gems. To do so, players must stack either golden mask or black masks rolled in the center of the room. Dice that fall must be re-rolled. If players stack 5 dice, you activate one gem. If you stack 10 dice, you activate two gems.

I really like this promo. It adds a little dexterity mini game to Escape. It’s easy enough to explain, and easy enough to mix into the room tiles. If you can get your hands on this one, it’s a fun room to add.

Overall, if you like fast pace, dice chucking, tile placement, and real time games I think you’ll enjoy this one. There’s a Big Box version of this game out that includes all the expansions, but I’ve only played one expansion so far. That review is coming later. You get to a certain word count and then have to decided enough is enough talking about Escape before you end with a short novel. Escape: Illusions will be coming soon, and I promise that one will be shorter.