Hey folks!  I’m back with another preview!  This time it’s Roar and Write. A roll and write game based in the Animal Kingdoms Game series.  In this game, you’ll be rolling your way through 5 ages making offerings to the different council members to help sway their vote. See, the animal kingdom is looking for a new monarch to rule over them all. It’s up to the council members to pick one ruler.  During this competitive press you luck game, you’re trying to earn the most points. 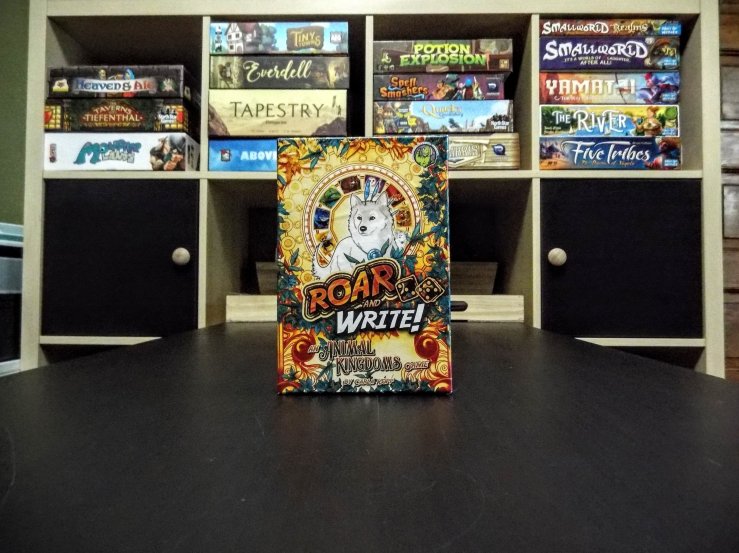 These are the different animal council members you’re trying to appease.

Okapi – Values that are either different or the same.

Tiger – Pairs or triples of same value dice or odd or even dice.

Lizard – Even or Odd pairs or triples of the same value. 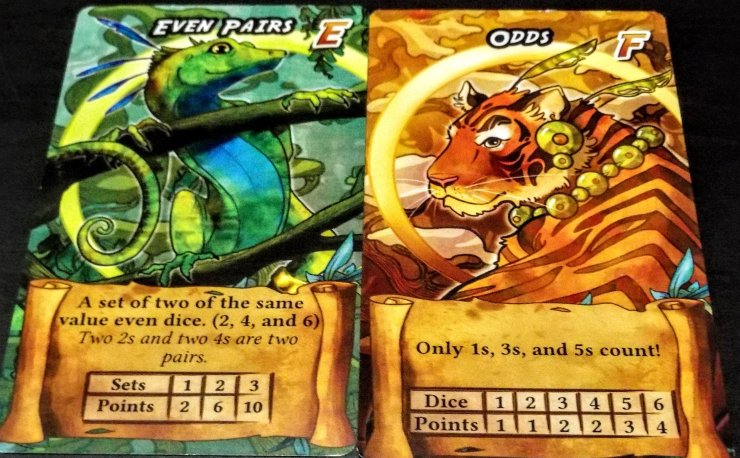 Frog – Only count a single number. 6 different frogs for numbers 1 to 6.

Wolf – Dice that add up to a certain number. Different wolves for values 3 to 8.

This will earn you bonus points at the end of the game if you collect the unique number listed and pairs of numbers listed. Keep those in mind when writing down numbers on your pad.

The score sheet has a top, middle, and bottom section.

The top is the kingdom area. Here you’re putting numbers not used as offerings to try and complete the section.  This includes 2 pairs, same numbers, any value, big to small, and small to big.

The middle is the council offerings. Here you’ll write down numbers based on each roll for the 5 different rounds. Use one row at a time. And you’ll score the round at the end of 3 rolls.

The bottom is the scoring area. Here you’ll add your ongoing total to your personal agenda scores, your bonus for making offerings to different council members, and then any kingdoms you have finished.

The game is played over 5 rounds or ages. Each round, or age, consists of rolling the dice 3 times. All players use the same dice roll to write on their score sheets.

The player with the highest points is the new monarch of the animal kingdom!

Okay, this is a prototype that was provided by Galactic Raptor Games. Art and components are subject to change. That being said, the card quality and are on the prototype are gorgeous! I really liked the look of the other Animal Kingdoms game and this is just as good!  The dice are just 6 regular dice that matched. It looks like the final product will have nicer looking translucent dice. Overall, I’m pleased with how it all looks.

The score pad looks a little confusing at first. However, I think if you break it down as the top, middle, and bottom it’s not as bad. Top is played over all rounds, middle is played one round at a time, and the bottom is scoring. Artwork on the score sheet is nice and matches the feel of Animal Kingdoms. I’m not sure if I’m entirely sold on the personal numbers being on the back of the score sheet.  For roll and write games, I’m a fan of laminating a few score sheets and using dry erase markers. so in that sense, I like the cards better.

As for the game play, I like describing this as a gamer’s Yahtzee. There’s a lot of options to go with when playing. I like that you choose what council member to go with after you play the 3 rounds. It makes the turns a little more forgiving on bad rolls.

I’ve found that the council members mimic a lot of the Yahtzee criteria for scoring. It’s a good take on a familiar feeling game.  I really like that each game, you’re picking what difficulty and what council members to use.  It makes it so each game feels a little different.

I liked that everyone is using the same dice rolls. I felt like this sped up the game, It was also interesting to see what everyone was going for at the end of the round. It just shows the variety of ways you can play each round.

The top of the score sheet adds something for those rounds you just don’t get what you need. It’s a tough decision to pick what to go for there. You’re limited on what you can write down up there unless you forgo offerings on the round you’re playing. There were times that I felt completely confident I wasn’t going to do well in a round, and went for the kingdoms instead. Then there were opposite times, where I felt confident I was going to do well in a round, and then ended up not getting what I needed.

The personal unique numbers add more points to earn each game. It also drove your decisions on what council member to go for and what to write down. I found myself going for the items that benefited those the most.  Is that a solid strategy?  I’m not too sure yet.  Seems to have worked for me.

Roar and Write is a solid roll and write game.  It’s a step up from Yahtzee and has a nice theme to it. It’s got some great artwork that I wish I could see more of it. In the game Animal Kingdoms, you can see more of the artwork. I recommend this for anyone that enjoys a roll and write with replay ability. This game has a lot of choices each round and has a good amount of press your luck.

Roar and Write is currently on Kickstarter. It’s has just over a week left and has hit it’s goal.  You can find the link to the Kickstarter here. <—–