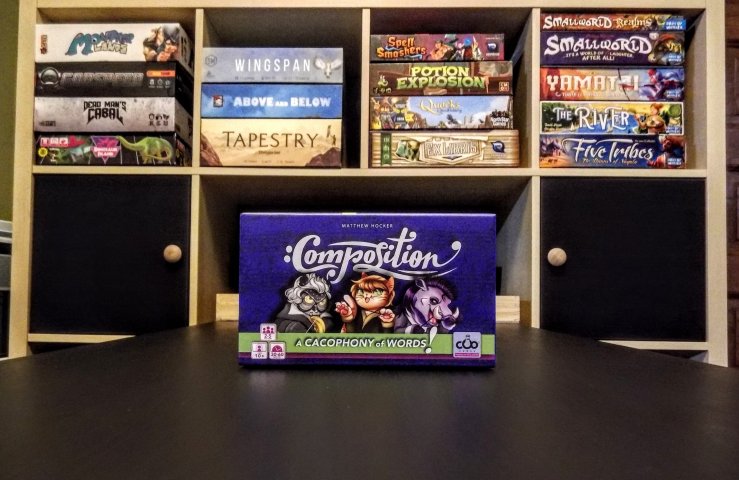 Hey folks! I’m back again with another review!  This time, we’re grabbing a baton and orchestrating the most magnificent, marvelous, and sometimes mundane words! We’re doing this to become the best maestro and along the way we’re earning awards and might just buy some ovations. Just watch put for tomatoes coming your way. Those can really put a damper on your symphony of word building. Composition is a letter drafting card game where each player starts with a unique character and letters to use. The game is played until all ovation or award cards are gone. Then the player with the most award badges is the winner!

A copy of Composition was provided by Coo’ Games for this review. 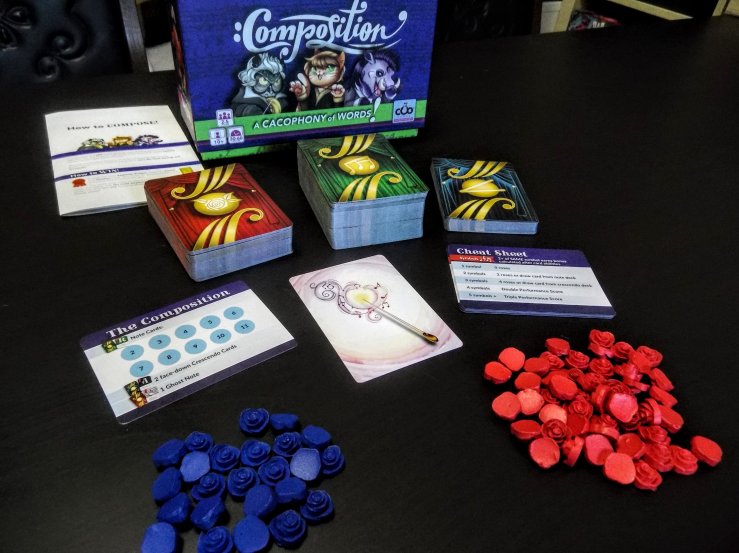 The game is played over several rounds until either all ovation cards or all award cards are claimed.

Starting with the player holding the baton card, players will take turns selecting one card from the composition area until there are not cards available. Players cannot skip taking a card if there are free cards still available. If a player cannot or chooses not to draft a card and there are no free cards to draft the round is over.

Players simultaneously use the cards drafted and set letter cards to form a word. This is known as your performance for the round.

Players may spell words of any combination of cards drafted including their Maestro letter cards. Players may repeat words spelled previously.  Can’t think of a word? You can pay another player one rose to assist you in your performance of spelling.

Starting with the maestro with the baton card, players will confirm they have a word. Once confirmed they have a word, you can’t change your selection. The word is placed in front of you maestro in your performance area.

Only two unused note or crescendo cards without a lock can be stored in your chorus slots.

Now, starting with the maestro with the baton players will read their performances out loud.

If a player challenges your word, confirm that it’s actually a word in the dictionary. If it is, you earn the roses. If it’s not a word, you don’t earn the roses.

The last round is triggered when there are either no more ovation or no more award cards. The final round is played, as players can still earn roses and buy ovation cards or win award cards.

I loved the components of this game!  The little blue and red roses are adorable!  And it follows with the Maestro cards too!  The art on the Maestro and Tomato cards are cute and add a lot of eye candy to this game!  I like that this game pulls so much from music. The baton card, the Maestros, even the background of the note and crescendo cards. And yes, there is a musical T-Rex in the game and a pretty impish Imp. Just so much character here! It all fits in a small box.  Now, it’s a different size box than I’m used to, but it works really well with the components. 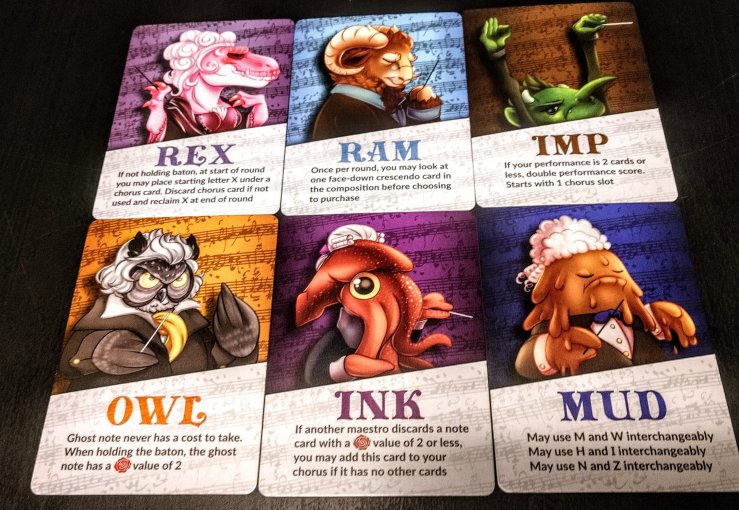 Game play was something to get used to at first. I like drafting games, and this one does it well. What threw me off a little was the inclusion of the Ghost Note.  First time playing, I was expecting everyone to get the same amount of letters when playing. If no one buys anything first round, then one player should end up with an extra card.  Now this doesn’t matter too much as the ghost note goes back to the composition and any notes that aren’t locked are discard at the end of the round. Now I also thought the game seemed a little slow the first couple of rounds. However, it’s like the game has a accelerando built into it. As you earn more roses, you have more options to buy cards during drafting.

Not only are the Maestros all cute looking, each one has a different power. If you’re using a different Maestro each game, not only do you get a new power but you get new letters too. I found this well done and all seemed pretty balanced. There’s even a masked Maestro that shuffles in all the maestro letters and draws four. It’s only used in the solo variant, but once again well thought out to making the game feel different each time. 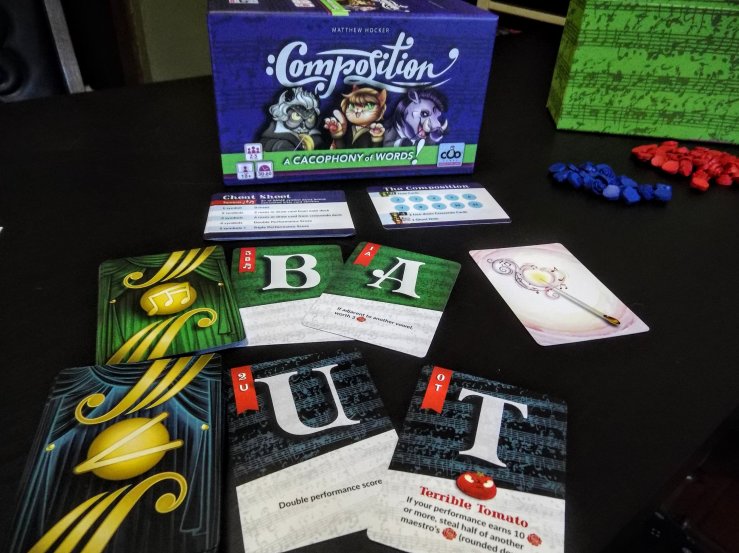 I like that you’re buying the crescendo cards blindly.  Sure, it might throw things off, but it also feels a little like buried treasure when drafting a good one.  If exposed, then the first player would almost always buy a locked crescendo for themselves. I feel like the trade off of not knowing and the cost of roses is smart.

I’m a band geek. I played in middle school and all of high school.  I was in concert band, marching band, and jazz band.  So when I saw a game about spelling and music I was stoked.  Fun fact, I was a percussionist and played bass guitar in jazz band.  I had a 6 string bass, and it was the coolest!  So cool, I got my senior pictures with it and a leather jacket. . . Looking back I probably could have picked something less Fonzie. That being said, I don’t think you need to be a bass playing, leather jacket wearing band geek to really enjoy this game. This is a gamer’s word game. It’s not scrabble or boggle. In this there are a lot of decisions on what to do each round. You could try and use each letter drafted to spell a word or you could slot a couple in your chorus slot and hope for a grand performance next round. Same with roses. Do you buy a crescendo when you have 5 roses or do you hold off for a ovation card?

Overall, Composition is a smartly designed word game.  There is a lot of replay value in this smaller box game. I can recommend this to anyone that likes word games or drafting games.

You can purchase a copy of Composition from Coo’ Games website.