Hey folks! Back again with another review. This time, we’re talking about blueberries and strawberries. There’s this cake that they live on. Each one wants to rule over this cake land. We’ll call Strawberries the Red Party and Blueberries the Blue Party. There’s this election coming up. Currently they both have the ability to manipulate the cake into districts to gain favor of voters. This is known as Berrymandering. It’s a two player abstract game that’s based on Gerrymandering. It’s a I Cut, You Choose style of game.  At the end of the game, the player who earned more candles is the winner!

Mystery Tokens – These are used on the question mark cake tiles. Once a player has selected a district with a question mark, a random mystery token is added to the district. These can are either more blueberries or strawberries and can swing the district if divided closely.

Team Cards – These are cakes that will help a player keep track of districts won. 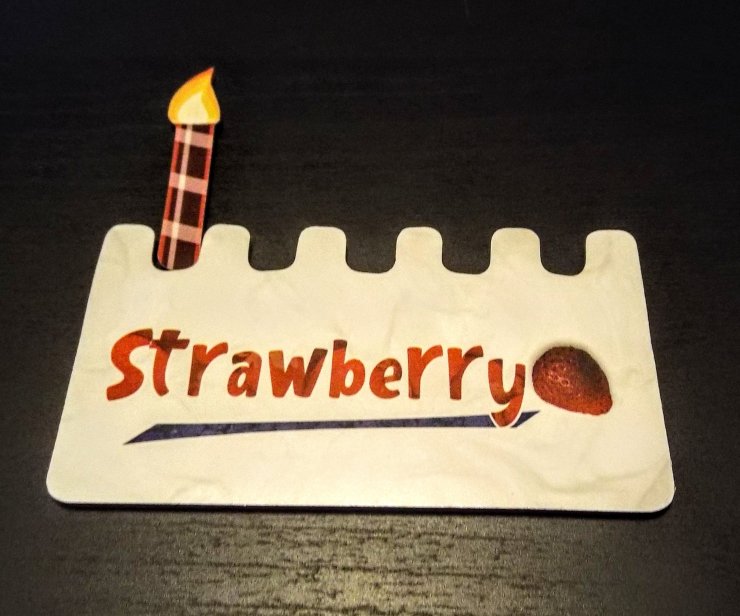 The game is played over 9 turns. At the end of the game, the player with the most candles is the new ruler of cake land.

Pick the starting player. They start the turn cutting, while the other player will choose a district to score.

Cutting the cake. When a player cuts the cake, they can do so as long as there are 9 pieces and each piece has 4 cake tiles. Once formed, a piece will move slightly so it’s easier to see the dividing lines. You cannot pick up and move pieces to different sides of the cake. These berries have lived on this cake for most of their lives and won’t be moves around so some higher up berries can win an election. You also can’t separate a piece that has been scored already.

Choosing the perfect slice. The second player will select a piece of cake to score. If a piece has a ? on it, pick a random mystery token and place it face up on that tile. Surprise!  That district had either more blueberries or strawberries supporters. Count each of the sides berries. The party with the most berries in that district is the winner!  They have earned a coveted anniversary torch of remembrance. Also known as a birthday candle.  Flip that torch of remembrance to your color and stick that atop your player card!

Then, flip the district that was just scored and push the cake back together.  Now, it can be cut again any way the other player chooses, sticking to the rules above.  9 Pieces, 4 tiles in a piece, and previous piece need to stay together.

After one player has cut and the other has chose, the roles reverse and the game continues until all the slices have been devoured. The party with the most candles is the new ruler of the cake!

Berrymandering is a small box game. In total it comes with 53 pieces of cardboard goodness. The cake tiles are simple enough and easy to read. One to four berries on each one. The mystery tokens are round and easy to distinguish from the cake tiles. I really liked the player cards and candles to keep score. It fits the theme, and it’s fun to make your cake as you win pieces. I think I’m going to be purchasing a bag to keep the cake tiles in, as I can just shake them up and randomly draw to make the 6×6 grid.

Game play is super fast and simple.  I cut the cake, you choose a piece. Score, then repeat until the whole cake is gone. The player with the most candles is the winner!  It plays in about 10-15 minutes depending on how often you change up cuts and trying to figure out what will best benefit you.

I really liked how strategic you can be in the game. I found myself not only looking to see how I can cut and either force my opponent to pick a piece that would make me win, or make a throw away piece to get rid of their berries. Then when I was up to choose a piece, I wasn’t always taking the certain win. I would study the board and try to plan ahead. If I took this piece, then that could only be cut a certain way. If I took that piece, then it takes away a three berry tile from my opponent. So you’re constantly trying to out wit and maneuver your opposing party. 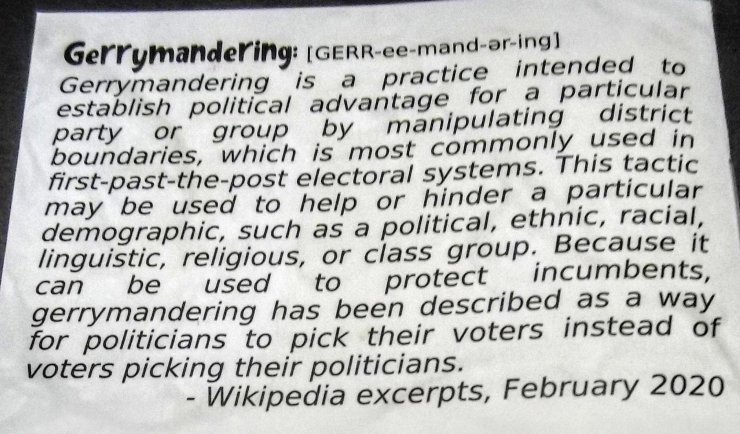 Educational wise, I think this game really shows gerrymandering well. If gives you the visual of it and then it has players actually figuring out how to manipulate the area for gains. From doing research, the word gerrymander was coined in 1812 when Governor Elbridge Gerry signed a bill to redistrict Massachusetts. Originally spelled Gerry-mander, it was a portmanteau of Gerry and salamander. This is because the redistricting made one of the distorted districts near Boston look like a mythical salamander. There you go, a little knowledge for today.

Overall, I found the game very enjoyable due to the ease of rules, play, and time to play. Sometimes you don’t want a 2 hour game to play or you need to play something between games or while players are arriving. If you’re a fan of I cut, you choose or abstract games I can see you liking this one. If you’re looking for something educational to play with your kids, I can see this as something to play.

You can get a copy of Berrymandering here or here.