Ahoy folks! Today we’re going to travel to Gullsbottom most happening port. We’re going to gather resources, ship goods, and expand our business on the pier. We’re buying buildings to become the Harbour Master in Gullsbottom!

Harbour is a small box game with a lot of punch. It’s a worker placement game with an economic twist with resources. It’s a game from Tasty Minstrel Games, TMG for short. The game is designed by Scott Almes. You may of heard or seen some of his games, Tiny Epic (Insert Galaxies, Kingdoms, Western, Defenders, or Zombies here). He makes great games that fit in smaller boxes. Harbour is one of those games. Inside the box comes 4 Worker Meeples, 36 Building Cards, 14 Player Cards, 4 bonus cards, a Market Card, and 20 Goods markers. That’s a lot that fits in this box. I was surprised when I first opened it up. 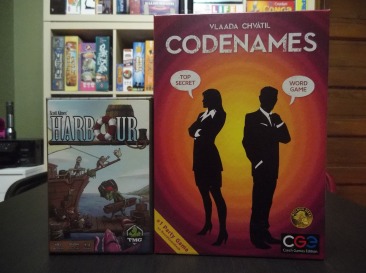 First, I want to talk about the art. The illustrator is Rob Lundy. The art and game theme is what originally drew me to the game. Gullsbottom is a fantasy themed land. It appears to be full of giants, dwarves, gnomes, elves, trolls, and any other creature you might find in a D&D game. The art is fantastic! It’s humorous and well done. Each card is great to look at and each one has a quick little blurb about the character. Harvest and Embark are other games set in the Gullsbottom universe that I look forward to playing.

Now for the game play. Like I said before, this is a worker placement and market game. That means you’re moving your little meeple from building to building every turn, collecting goods, selling goods, and buying buildings.

Deal two player cards to each player. They then get to pick what character to play with. Each player card is two sided. One side has a generic character with no special ability. The other side has unique characters with special abilities. These can change how you play the game. I feel like they add a variety to the worker placement game. Some of these abilities range from gaining goods after buying a building to if you trigger the end of the game gain additional victory points. Each character has their own art along with a little blurb from Dockmaster Schlibble. Then each player starts with goods that total three. So your options are three different types at one each. One type at two and one at one. Or One type of good at three. If you’re playing the first time, you can opt for one of each good. There are crates at the bottom of your card. This is your warehouse. One crate is one good, two is two goods, and so on. This helps keeps the components in the box down as you ever only need one marker of each good.

For the market, you’ll need to set this up in the center of the table so all players can see. Next, you’ll use those bonus cards to randomly set up the market. There’s a bonus card for each of the goods. Fish, Stone, Wood, and Animals. So, shuffle the cards, then start drawing for the market. First card drawn will go in the $2 and so on until all four spots are filled.

Let’s talk about how the market changes. I like this mechanic, the market is constantly fluctuating. When you sell any goods, you slide them down on the market card. Then, all goods not sold slide to the right filling any empty spots. After all unsold goods have been adjusted, then the sold goods make their way back to the market. Starting with any goods under the $2 market place, and going in sequential order, slide them to the next unoccupied spot. Essentially, if something was sold for $5, then it will end up being the $2 good now.

To sell a good, you must have the number of goods that it sells for. For example, when selling fish for $2, you’ll need at least two fish. If selling $4 Wood, you’ll need at least four wood. Now when selling goods, you have to sell everything when shipping out. If you have six fish, but sell them for $2, you have to sell all six fish for just $2. So that makes wanting to sell your goods at the right time.

Now, let’s go over buildings. You’ll draw buildings equal to the number of players plus three. So if you have a three person game, then you’ll play with six buildings. Once a building is bought, replace it with one from the building deck. The game goes on until a player has bought their 4th building.

Each building has a name, price to buy, and victory points at the top. At the bottom of the card is what action your worker can take and an icon or icons that players gain when they buy the building. Each building also has their individual art. Once again, this is really well done and humorous.

These icons are Anchors, Top Hats, Coins, and Warehouses. Anchors gain more goods at certain buildings. Top Hats allow you to use another players building without paying them. Coins reduce the cost of buildings by $1 for each coin you have. Warehouses let you keep goods when shipping. You get to keep one good of one type per warehouse owned. So deciding what buildings to buy can make a difference with game play. Now, game play goes on until one player buys their 4th building. Don’t get too set on making an engine with buying buildings. My personal favorite is Fish Market or Library for the art.

I haven’t played this with my grandma yet. I think she would get the concept of placing the worker and doing the actions. I think she would have a hard time moving the market around. I do plan on playing this with her in the near future, but I wanted to get this review out before Embark was released. That’s the third game in Gullsbottom universe. I think Thief’s Market might be in the same universe as well, but I’m unsure. Overall, I think she would get a kick out of this game.

I like this game as my intro to worker placement games. The art is nice to look at, it’s a fast paced game, and has an interesting market system. Some may not like the changing market, but I enjoy the added element to the game. I also like how small of a box this comes in and the type of game play you get. It feels like a much bigger game, but due to using cards for the buildings and only 20 good markers it’s able to fit int such a small box. I like how on your player card you have a place to count your goods. This is a quick worker placement game. It’s set in Gullsbottom and has a lot of character to the game. I’d suggest this for anyone looking for a worker placement game that plays faster than some of the other ones.